The story is in 1 Kings 22. Ahab, king of Israel (874-853 B.C.), and Jehoshaphat, king of Judah (870-848), decided to try to take back the city of Ramoth-gilead which had fallen under the control of the king of Aram (Syria). Ramoth-gilead is a city of tranjordan, now in the northern part of Jordan near the border with modern Syria.

Ahab was fearful to be seen in battle and disguised himself to avoid attack.

Now an archer shot an arrow at random, and it struck the king of Israel between the plates of his armor. The king ordered his charioteer, “Turn around and take me from the battle line, because I’m wounded.” (1 Kings 22:34 NET)

The king of Israel died and was taken to Samaria for burial.

JP van de Giessen, a fellow blogger at Aantekeningen bij de Bijbel, has kindly granted permission for the use of these wonderful photos he made at the Romanfestival in Nijmegen (the Netherlands). He tells me that the festival is organized every two years with many actors. At this festival there were about 100 soldiers, 10 calvary and 120 civilian people (from slave to noble).

JP says the archers he photographed are Persian archers dressed according to the time of the Seleucids (the period between the testaments). They provide great illustrations for a lesson on 1 Kings 22.

Archer from the time of the Seleucids. Photo: JP van de Giessen.

According to JP, one of the archers he spoke with said he needed a year to create his costume, and another year for his bow and sword. 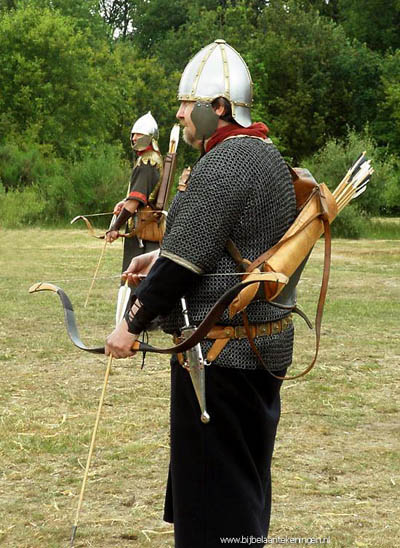 Archer dressed as at the time of the Seleucids. Photo: JP van de Giessen.

More photos may be viewed here. JP van de Giessen holds the rights to these photos, but I think he is pleased when they are used in teaching. Click on the photo for a larger image.

Temples along the Nile River

The temple of the sun god Horus at Edfu. Photo by Ferrell Jenkins.

Edfu Temple. This is the temple of the sun god Horus who is represented by a falcon. The temple was begun by Ptolemy III in 237 B.C. and completed by 57 B.C. Ptolemy is portrayed repeatedly on the temple walls.

The Ptolemies were generally favorable to the Jews, whereas the Seleucids of Syria treated them unkindly during the period between the testaments. Ptolemy and Seleucus were generals of Alexander the Great who succeeded him in these area.