The town Myra is known to students of the New Testament as a place where Paul transferred ships while he was being taken to Rome for trial before Caesar (Acts 27:5).

In the centuries following, Myra became the home of a (Greek Orthodox) bishop known as Nicholas. Born in Patara, Nicholas died December 6, 343. Several legends arose around Nicholas who was noted for giving gifts to the poor and raising the dead.

Highly revered in Greece and Russia, St. Nicholas is known as the patron saint of children, sailors, merchants, and scholars. From his life of piety, kindness, and generosity arose the legendary figure celebrated today as St. Nicholas, Father Christmas, or Santa Claus. (Fant & Reddish, A Guide to Biblical Sites in Greece and Turkey, 256)

The ancient Myra is associated with the modern Turkish town Demre (or Kale). I thought you might enjoy seeing a few pictures related to Saint Nicholas. In the town square is a recent statue showing St. Nicholas with children. The statue was a gift of the Russian government in 2000. Many Russian tourists were visiting the day I was there.

A few decades ago I saw an older statue near the entrance to the church. It now has a fresh coat of black paint.

Older statue of St. Nicholas near the entrance of the Byzantine church ruins.This statue depicts him carrying a bag of gifts.  Photo by Ferrell Jenkins.

The Byzantine church dates to the 6th century A.D. Several writers point out that the sarcophagus of Nicholas was broken into by Italian merchants in the 1087 A.D., and his bones were taken to Bari, Italy.

Wilson says the church is built like a basilica “in the shape of an orthodox cross” (Biblical Turkey 88). 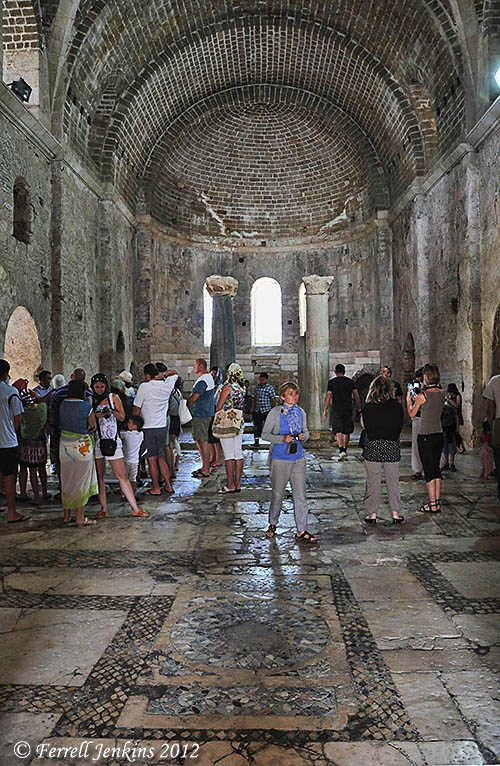 This last photo shows one of the poorly preserved frescoes.

Fresco on the wall of St. Nicholas church in Demre. Photo by Ferrell Jenkins.

Tourism seems to be thriving at Myra even though the town is off the beaten track. Whether there are any Christians in the town is doubtful.

For an earlier post about Myra and St. Nicholas, see here.

Christmas is approaching. I would like to call your attention to an article I have written about Christmas. You may read it here. A more detailed outline, The Truth About Christmas, giving both biblical and historical information is available in PDF at BibleWorld.com. You are welcome to duplicate these articles for your own use. Please do not make changes in them.

Even by the end of the first century the church was beginning to move away from the apostolic pattern. One of the earliest departures was in church government. Instead of each church having a plurality of elders (bishops, overseers, pastors) (Acts 14:23; Philippians 1:1), it became popular to elevate one man to the position of Bishop over the elders.

In the fourth century there was a bishop at Myra, by the name of Nicholas, who was benevolent to those in need. From this historical person there arose the legend of Saint Nicholas, eventually Santa Claus.

Myra was a town of Lycia about 85 miles from Antalya, Turkey (biblical Attalia, Acts 14:25). The town is located a few miles away from the Mediterranean, but has a port. When Paul was being escorted by a Roman centurion from Caesarea Maritima to Rome, the ship sailed along the coast of Cilicia and Pamphylia, and landed at Myra in Lycia (Acts 27:5). There they found an Alexandrian ship sailing for Italy.

Whether Paul was close enough to see any of Myra we do not know. There are several interesting things that could have been seen. I have only visited Myra once, in 1987. I mention this to say that it was before the days of digital photos. Here is a photo of the house-type tombs in the cliffs at Myra dating from the 4th century B.C.

The theater at Myra dates from the 2nd century B.C., and had a capacity of 10,000 spectators. The following photo comes from the Wikipedia entry on Myra.

Ruins of the Church of Saint Nicholas can be seen at nearby Demre. Here is a photo I made of the statue of St. Nicholas in 1987.

And that’s how legend grows!