Repairs made during the time of Hadrian

Hadrian has been in the news this week because of the recently discovered inscription found north of Damascus Gate in Jerusalem. In the Israel Museum there is an inscription that reads,

The August emperor Caesar Trajan Hadrian made [the aqueduct] by [means of] the unit of the Tenth Legion Fretensis.

This inscription was taken from the aqueduct at Caesarea Maritima and dates to near the time of Hadrian’s visit about A.D. 130. The accompanying sign in the Israel Museum says,

other dedicatory inscriptions discovered on the aqueduct indicate that additional work was conducted by soldiers of the Second, Sixth, and Tenth Legions throughout the Roman Period.

A couple of years ago I learned from Carl Rasmussen that a portion of the famous Caesarea aqueduct could be seen about 3 miles from Caesarea near the town of Bet Hannanya. (See his directions and photos here.) The photo below shows a portion of the aqueduct at that place. 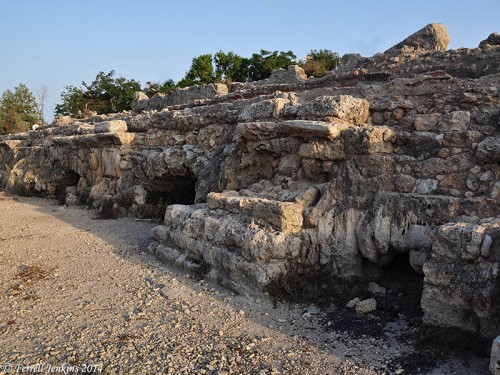 Aqueduct at Bet Hannanya. The inscription in our next photo is visible at the left of this photo. Photo by Ferrell Jenkins.

The inscription in this aqueduct is the same as the one on display in the Israel Museum. 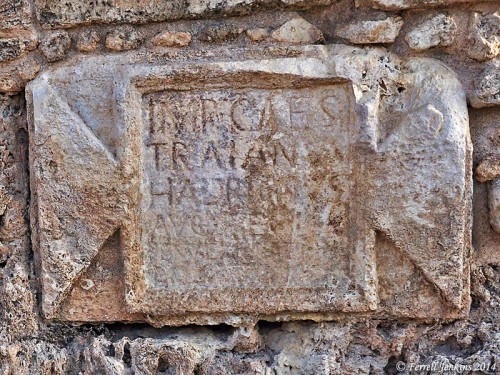 Meanwhile, at Caesarea Maritima, visitors may see the high-level aqueduct at the point where it come to an end likely due to erosion from the waves of the sea. According to Murphy-O’Connor the eastern channel (on the right) was “built by a Roman Procurator about the middle of the C1 AD.” The western channel was built by Hadrian. Some attribute the eastern channel to Herod the Great. 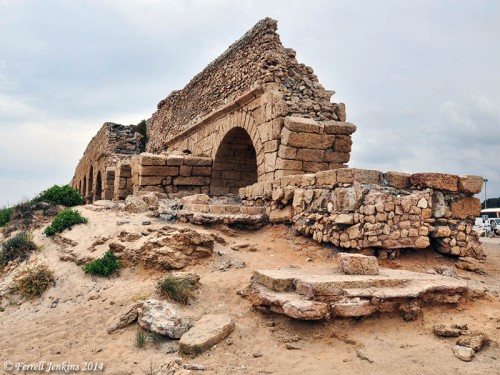 The Apostle Paul used the harbor at Caesarea several times. He was imprisoned here for two years before departing for Rome (Acts 24:27; 27:1).