The Center for the Study of New Testament Manuscripts (CSNTM) announces that they have filmed the Chester Beatty papyri. Here is the press release signed by Dr. Daniel B. Wallace, Executive Director of CSNTM:

The Chester Beatty papyri, published in the 1930s and 1950s, are some of the oldest and most important biblical manuscripts known to exist. Housed at the Chester Beatty Library (CBL) in Dublin, they have attracted countless visitors every year. It is safe to say that the only Greek biblical manuscripts that might receive more visitors are Codex Sinaiticus and Codex Alexandrinus, both on display at the British Library.

The Center for the Study of New Testament Manuscripts (CSNTM) is pleased to announce that a six-person team, in a four-week expedition during July–August 2013, digitized all the Greek biblical papyri at the Chester Beatty Library. The CBL has granted permission to CSNTM to post the images on their website (www.csntm.org), which will happen before the end of the year.

Using state-of-the-art digital equipment, CSNTM photographed each manuscript against white and black backgrounds. The result was stunning. Each image is over 120 megabytes. The photographs reveal some text that has not been seen before.

Besides the papyri, CSNTM also digitized all of the Greek New Testament manuscripts at the CBL as well as several others, including some early apocryphal texts. The total number of images came to more than 5100.

CSNTM is grateful to the CBL for the privilege of digitizing these priceless treasures. The staff were extremely competent and a joy to work with. Kudos to Dr. Fionnuala Croke, Director of CBL, for such a superb staff! This kind of collaboration is needed both for the preservation of biblical manuscripts and their accessibility by scholars.

Larry Hurtado tells a little more about the background of this project here. If you wish to see the quality made possible by the CSNTM, see these pages from a 3rd century papyri at the University of Pennsylvania here.

“Tischendorf was an honorable man and not a thief!”

If you have an interest in learning the “other side” of the Tischendorf-Sinaiticus matter, I suggest you read the English article from The Art Newspaper here.

What follows below is the comment left by Alexander Schick yesterday. I found it in my spam this morning and have marked it as approved. So far it has not shown up among the comments. I wanted to share this info with our readers, so I have elevated it to a blog entry. I knew there was controversy over the matter. Schick’s mother tongue is German. I have corrected spelling of a few words, but otherwise left the comment as I received it. In my post of yesterday I was telling about the letter posted at Saint Catherine’s. Here is the “other side” of the story. Our thanks to Schick for this information.

Your comment about Tischendorf”s letter at St. Catherine monastery. The letter and the explanation of the monks must be seen in a total new light!

The new discovery of the documents related to the Codex Sinaiticus in the archives of the Russian foreign ministry was a big surprise! Scholars hoped, that these documents could appear [be]cause of the international digital-project. A scholar-dream comes true! These donation documents which show, that the Codex Sinaticus was given by the monks as a gift to Alexander II. you can find online with pictures and translations http://www.nlr.ru/eng/exib/CodexSinaiticus/zah/

Worth to study! Everyone can now see, that Tischendorf was an honorable man and not a thief!

You can also find inline the letter of guarantee by Prince A. B. Lobanov-Rostovsky to Archbishop and the community of Mt Sinai Monastery,
from 10th September 1859, which was part of the agreement in Tischendorf’s receipt. See here the picture:
http://www.nlr.ru/eng/exib/CodexSinaiticus/zah/1_1.html

The photo below is from a slide I made at the British Museum in 1976. It shows Codex Sinaiticus and Codex Alexandrinus in a display case at the Museum. The manuscripts are now in the new British Library near the King’s Cross tube station.

Do you happen to have a photo of the letter that von Tischendorf wrote, saying that he would return codex Sinaiticus?

Well…, yes and no. A picture. But not a good one. There is now a museum or display area of a few small rooms in the Monastery near Moses’ Well. Signs are posted to restrict photography. A photo that I have from this year is too blurry to make sense of. A copy of the letter is posted on one wall and a sign about Codex Sinaiticus (in Greek, English, and Arabic), reads this way:

The Codex Sinaiticus dates to the middle of the fourth century, and is possibly one of the fifty copies of the Holy Scriptures sent to Constantine the Great by Eusebius of Caesarea. This same manuscript was likely donated to the Monastery of Sinai at its foundation, where it was preserved until the middle of the nineteenth century. It was seen in the library of the Monastery by the German scholar Constantine Tischendorf on his visits in 1844 and 1859. The first folios that he took, he presented to the University of Leipzig. The rest he gave to the Emperor of Russia, folios he had received as a loan so that they might be published, secured with lying promises to the monks. In Russia they remained until 1933, when they were sold by the Soviet Union to the British Library in London, where they are to this day. In 1975, certain folios of the Codex came to light among the New Finds in the tower of Saint George. The monks of Sinai have never ceased in their justified request for the return of their Codex.

The photo below shows the sign on the right and a copy of the Tischendorf letter on the left. 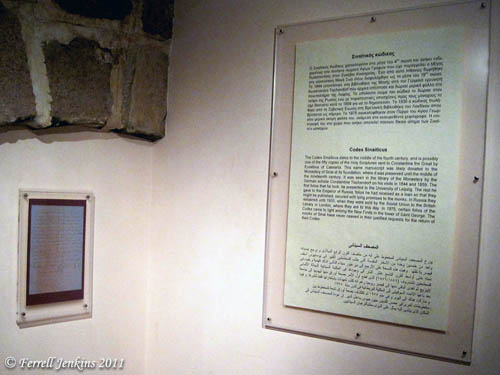 I remember visiting the Monastery library on two previous occasions. At that time we were taken into the library during the visit. I saw a copy of the Tischendorf letter and an English translation. Here is a scan of a slide I made in 1986. Click on image for a larger photo.

Tischendorf Letter at Saint Catherine's in 1986. Photo by Ferrell Jenkins.

The letter on the left is written in Greek. James Bentley says it was “bad Greek” and that the translation is “not very competent.” Here, he says, is what Tischendorf wrote:

I the undersigned, Constantin von Tischendorf, sent at present to the East by orders of Alexander, Tsar of All Russias, testify by the present letter that the Holy Confraternity of Mount Sinai, in accordance with the letter of His Excellency Ambassador Lobanov, has handed over to me, as a loan, an ancient manuscript of both Testaments, being the property of the aforementioned monastery and consisting of 346 folia and a small fragment. These I wish to take with me to St Petersburg in order that I may compare the original with the copy made by me when that is printed.

This manuscript is entrusted to me under the conditions laid down in the aforementioned letter of Mr Lobanov, dated 10 September 1859, numbered 510. I promise to return it, undamaged and in a good state of preservation, to the Holy Confraternity of Mount Sinai at its first request.

Several years ago I read James Bentley’s Secrets of Mount Sinai: The Story of the World’s Oldest Bible — Codex Sinaiticus (Doubleday, 1986). It is an interesting book and may still be available. The foreword is by James H. Charlesworth.

Sorry I can’t do better, but I hope this will be helpful to those who are interested in the history of Codex Sinaiticus, the oldest complete manuscript of the New Testament.

My upgrade to BibleWorks 9 arrived about a week ago. I am enjoying getting acquainted with some of the new features and resources. For information see here. 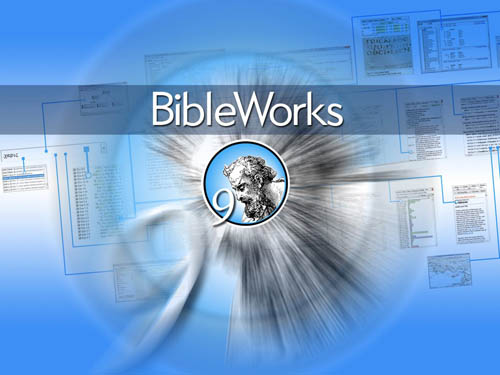 Mark Hoffman has given a sort of pre-review at his Biblical Studies and Technology Tools website here. Hoffman was a beta tester for the new version.

Hoffman also talks about Logos for Android here. As a user of Logos (Libronix) I was delighted to see this beta app for the Android. I am enjoying access to many of the Logos books and have downloaded a couple of significant volumes.

Carl Rasmussen, author of Zondervan’s Atlas of the Bible, recently visited a well preserved portion of the Caesarea aqueduct. But it is not the portion of the aqueduct that most tourists see immediately north of Caesarea. This portion is about 3 miles north-northwest of Caesarea. Nice photos included on his HolyLandsPhoto blog here.

Carl also reports that a new paved road now goes directly to Yodfat (Jotapata). This is an improvement over the hour long walk to the site. See here. He visited Qumran, caves 1 and 11. See here.

Since I wrote the two paragraphs above there is a new post about the Middle Bronze I Age tombs (2200-2000 B.C.) located about 16 miles northeast of Jerusalem at Dhahr Mirzbaneh (east of Ein Samiya). Click here.

These three posts by Prof. Rasmussen include photos with a link to additional photos at his Holy Land Photos site.

The Center for the Study of New Testament Manuscripts (CSNTM) announces that they have added Free Audio and Video at iTunes U.

The Center for the Study of New Testament Manuscripts (CSNTM) has always been committed to helping others understand the reliability of our New Testaments, the history of translations, the study of the text, and significant figures who have made this possible.

Beginning today, CSNTM is making a series of videos concerning New Testament manuscripts, textual criticism, history of the New Testament, and expert commentary on key verses available as a free download on iTunes U.

Featured in the videos are interviews and footage shot around the world of important people involved in the work of the Center. Dr. Daniel B. Wallace will also be featured as he explains important aspects in the study of the text of the New Testament.

CSNTM homepage is here. The direct link to the series on Biblical Criticism at iTunes U is here. Inexpensive way to get a great education. Daniel Wallace does a superb job with these presentations. Take some time to listen and study.

Dr. Wallace will debate Bart D. Ehrman at SMU in Dallas Saturday October 1 on the subject Can We Trust the Text of the New Testament? There is a charge for admission, but perhaps this material will be available later on audio/video. Info here.