Our favorite foto today was made near Tel Goded, also known as Tell el-Judeideh. This mound has been suggested as the site of Moresheth-gath, the home of the prophet Micah (1:14; see The Sacred Bridge, 170). This site is located on the Israel National Trail. 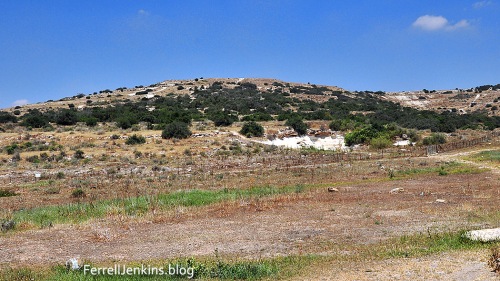 Tel Goded, also known as Tell el-Judeideh, may be the location of Moresheth-gath, the home of the prophet Micah. Photo by Ferrell Jenkins.

Our photo was made near an underground spring, or possibly a cistern, just outside the lower right corner of the photo. 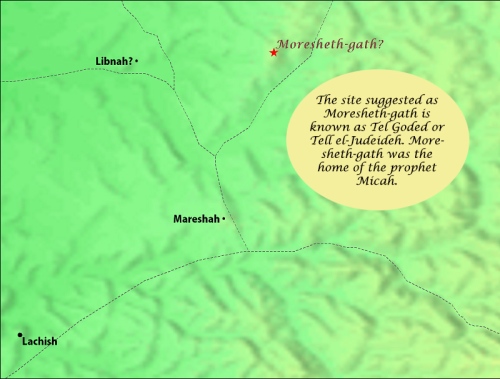 This map was created using BibleMapper 5. Moresheth-gath is located 5.9 miles from Lachish. The suggest site for Libnah is known today as Tel Burna.

Thorns and thistles are mentioned as a plant more or less worthless. As a result of man’s sin, the earth was to bring forth thorns and thistles (Genesis 3:18-19). Jesus said that false prophets could be recognized by their fruits. He said, “Are grapes gathered from thornbushes, or figs from thistles? (Matthew 7:15-16, ESV).

A large variety of thorns and thistles grow throughout the bible lands. During the rainy season many of them produce beautiful flowers, but later on they become a real problems to those who wish to walk through the fields. Peter may be drawing on this figure when he says, “Therefore, gird your minds for action”  (1 Peter 1:13 NAS). Just as a person of that time would gird up their flowing garment to keep it from hanging on the encroaching thistles along the path they were walking. We miss the imagery with our newer versions that say something like, “preparing your minds for action” (ESV).

He tells them to gird up the loins of their mind. This is a deliberately vivid phrase. In the east men wore long flowing robes which hindered fast progress or strenuous action. Round the waist they wore a broad belt or girdle; and when strenuous action was necessary they shortened the long robe by pulling it up within the belt in order to give them freedom of movement. The English equivalent of the phrase would be to roll up one’s sleeves or to take off one’s jacket. Peter is telling his people that they must be ready for the most strenuous mental endeavour. They must never be content with a flabby and unexamined faith; they must set to and think things out and think them through. It may be that they will have to discard some things. It may be that they will make mistakes. But what they are left with will be theirs in such a way that nothing and nobody can ever take it away from them. (Barclay, William, ed. The Letters of James and Peter. Philadelphia: Westminster John Knox Press, 1976. Print. The Daily Study Bible Series.)

I looked through several books showing the plants of the bible lands as well as the Thorns and Thistles photos in the Pictorial Library of Bible Lands. I think this is the Holy Milk Thistle, sometimes called Mary’s thistle. 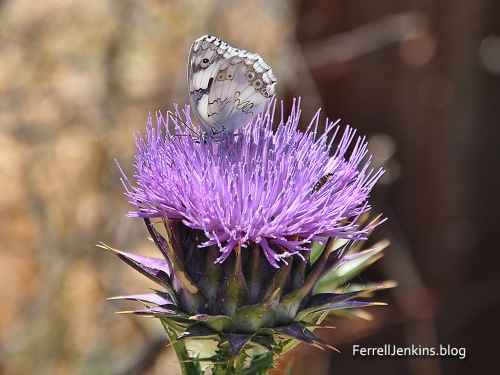 A beautiful butterfly on a thistle near Tel Goded (T. Photo by Ferrell Jenkins.

What makes this photo a favorite is not only that it is a thistle but that it also has a beautiful butterfly on it. If you look closely you may also see an insect, but you can’t miss the sharp thorns.

The comment by G. E. Post in the old Hastings, A Dictionary of the Bible, is interesting – even colorful.

There is probably no country on earth of the same extent which has so many plants with prickles and thorns as the Holy Land. One would be tempted to believe that this is a providential provision to protect them from the ravages of goats, asses, and camels, were it not that the mouths of these creatures are provided with a mucous membrane so tough that it seems impervious to thorns.

One response to “Ferrell’s Favorite Foto #38 – a thistle”