The Midras Ruins (Horvat Midras) in Israel are part of the Adulam Grove Nature Reserve east of Hwy 38 between the Elah Valley and Beit Guvrin. According to the Parks department sign at the site, the ruins are part of an ancient settlement including caves, pits, and other installations. The Carta touring atlas says the area was continuously inhabited from the time of the Kings of Judah to the Roman period.

For a more complete discussion of the Midras Ruins tomb, along with links to photos before the tomb was vandalized, read here.

This photo was made in the late afternoon several years after the tomb was defaced by vandals. Photo by Ferrell Jenkins.

The sign at the cave indicates that it was in use from the first century B.C. until the Bar Kochba revolt (about A.D. 135).

The large rolling stone now at the entrance to the cave is a remnant of the grand burial cave once located here.

Beyond the entrance, two chambers were discovered, containing burial niches 1.80 meters [almost 6 feet] long. The inner chamber contains decorated arches, arcosolia, in which ossuaries were placed, containing the bones of the deceased in secondary burial.

The sherds discovered in the cave indicate that it was in use from the end of the first century CE [AD] until the Bar Kokhba Revolt (132-135 CE).

Browsing through my photos I rediscovered the next photo from a visit to the site in 2011. It shows a more natural look except for the destroyed area above the rolling stone. 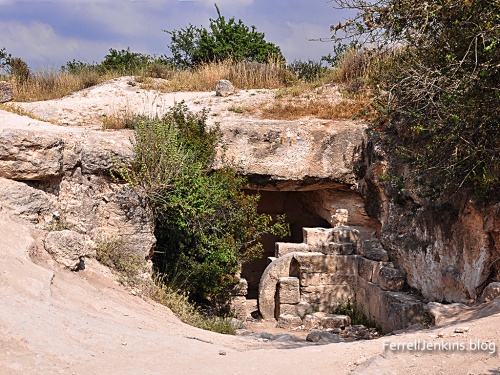 This photo shows the setting of the tomb with a rolling stone after it was defaced by vandals and then reconstructed. Photo by Ferrell Jenkins.

One response to “Rolling stone tombs #4 – the Midras ruins”