A sarcophagus from the Tomb of the Kings

One of the things we must learn when studying antiquities is that names (designations) may not be correct. To illustrate:

The tomb of the kings in the Sheik Jarrah neighborhood of Jerusalem, near the American Colony Hotel and other newer hotels such as the Grand Court and the Olive Tree, belonged to Queen Mother Helena of Adiabene.

Here is how the facade of the tomb looked in 2008. The tomb was not open to the public but I made arrangements for our tour operator for my group to make a visit.

The Tomb of the Kings at it appeared in 2008. The tomb has been closed most of the time since then. Photo by Ferrell Jenkins.

A few photos have appeared in newspapers from various cities. Compare this one with the photo I made in 2008 and you will see some significant repairs. The indication is that this is now open to the public (when Covid-19 conditions permit). 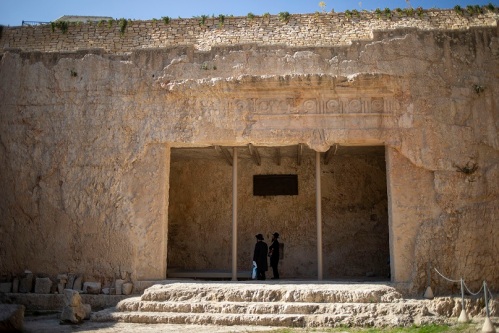 Daily Hayom reports the reopening of the Tomb of the Kings. (AP Photo/Ariel Schalit)

The tomb belonged to Queen Mother Helena of Adiabene. She came to Jerusalem with her son, King Izates, as a convert to Judaism in A.D. 46. Adiabene was located in northern Mesopotamia east of the Tigris River. During the famine in Judea, mentioned in Acts 11:28-30, the queen sent to Egypt for grain and to Cyprus for dried figs (Josephus, Ant. 20.51). For more from Josephus check this post.

A large burial complex was dug north of Jerusalem for the burial of the Queen and her family. This is the tomb referred to in modern times as the Tomb of the Kings. It is a good place to see a rolling stone and a tomb hewn from solid rock. The property is under French control and was closed for many years in need of repairs to the facade.

The tomb was reopened in 2019 but I have not been able to visit since that time. When the tomb was originally excavated by Louis Felicien de Saulcy various artifacts including sarcophagi were taken back to Paris and are now displayed in the Louvre.

The following sarcophagus was identified by Saulcey as a princess of the lineage of David, the Queen Helena of Adiabene.

This sarcophagus, now displayed in the Louvre, was thought by Saulcey to belong to Queen Helena of Adiabene. Photo by Ferrell Jenkins.

5 responses to “A sarcophagus from the Tomb of the Kings”