The six water jugs at Cana of Galilee

A friend recently sent me a small photo and a few questions about the water jugs at Cana of Galilee (John 2).

Attached is a photo of a reproduction of what I suppose is a wine jug. It is about 30” tall and 20” handle tip to tip. I bought it a couple of months ago at an estate sale. The seller told us tongue in cheek that it may be the very one from which Jesus turned water into wine. I told him that, in spite of how old I might look and the fact that I had not attended the wedding, I could assure him it was NOT the same one! 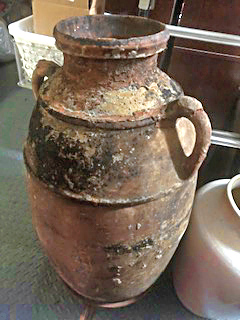 Is this like the jugs that held water at Cana of Galilee?

“My questions for you, Ferrell, are…

Now there were six stone water jars there for the Jewish rites of purification, each holding twenty or thirty gallons. (John 2:6 ESV)

The fact that the text says each jug would hold between twenty and thirty gallons indicate a larger jar than the one my friend bought. I have visited many museums, large and small, in Israel, as well as numerous antiquities shops, and do not recall seeing a jug like the one she bought.

Fortunately some of the jugs of the type mentioned in John 2 have been found in Jerusalem, Qumran, and other places. Notice the photo below from the Israel Museum. These are the jugs found in what we now call the Jewish Quarter of Jerusalem. Replicas are displayed in the Wohl Archaeological Museum at the place called the Herodian Mansion where they were found.

These stone jars, along with stone tables, now displayed in the Israel Museum come from the Jewish Quarter of Jerusalem from the Herodian Period. Photo by Ferrell Jenkins.

A replica of one of these jars is displayed in the Hecht Museum at the University of Haifa. The sign explains the purpose of the jars and the way they were made. 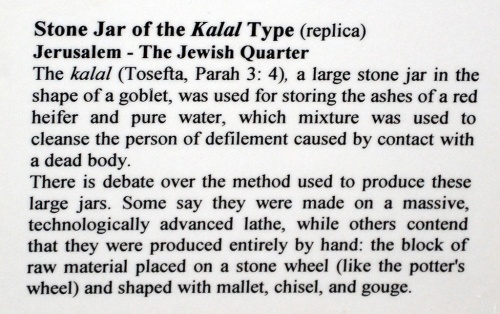 This sign explains the type of jars we are showing here. Hecht Museum. Photo by Ferrell Jenkins.

The Hecht Museum is a great teaching museum. In the model house shown below you will see several of the stone jars used for the water of purification. This model reminds me a bit of the Burnt House in the Jewish Quarter of Jerusalem.

The third question should have been asked prior to purchase. I have dealt with this question many times during my tours. Individuals come to me and say, “He is asking $___ for this item. Is that a good price?” I learned to say to tour members prior to visiting the first few shops that I will not be able to answer that question in the shop. If they purchased and then asked me if they got a good deal here is how I answered. If you like it and can afford it and are happy with it you got a good deal.

One other point should be made. The type of jar used for shipping and storing wine is known as an amphora. Imported jars such as this were also excavated in the Jewish Quarter. 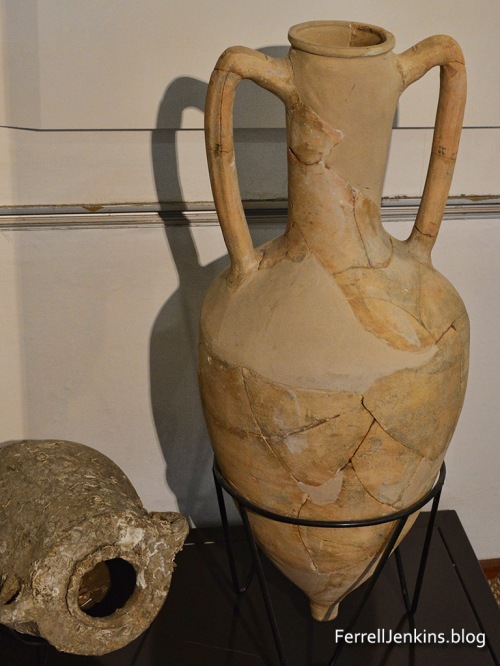 An amphora from the Hellenistic period displayed at the Hecht Museum, University of Haifa ,Israel. Photo by Ferrell Jenkins.

The pointed bottoms were placed in sand to hold them erect for filling and transportation. Many pictures and drawings of amphora can be found here.

Addendum: Leon Mauldin sent the photo below showing the author standing beside the model and a replica of one of the water jars.

Ferrell Jenkins standing beside the model and one of the water jar replicas. Photo by Leon Mauldin.

3 responses to “The six water jugs at Cana of Galilee”