In 2011 Leon Mauldin and I make arrangements to visit Tel Adullam and the Cave of Adullam. I had gathered some information from Prof. Carl Rasmussen and Gordan Franz about locating the site. We secured the services of a guide from the small town of Aderet, a moshav on the north side of Adullam. She took us to the site in a four-wheel drive vehicle and explained what we were seeing.

Tel Adullam is near the Valley of Elah where David had met and defeated Goliath (1 Samuel 17). 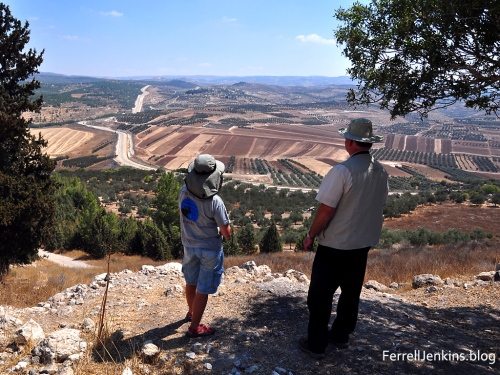 Daphna, our guide, and Leon look east from Tel Adullam. Notice the central mountain range in the distance. Photo by Ferrell Jenkins.

Once we reached the forested mound we enjoyed a wonderful view to the east, and south. Our guide, Daphna, inquired first about our interest in the site. How did we even know about the site, she wondered. She is a Sabre, a native-born Israeli, who lives at Aderet.

There is a large cave at Adullam. Is it the cave where David stayed while fleeing from Saul? Can’t say, but if it was not this one it had to be another one near by. The next photo was made from inside the cave.

Inside the Cave of Adullam where David and his men stayed while fleeing from Saul. Photo by Ferrell Jenkins.

Adullam is significant in several biblical accounts. Here are a few.

At that time Judah left his brothers and stayed with an Adullamite man named Hirah. There Judah saw the daughter of a Canaanite man named Shua. Judah acquired her as a wife and had marital relations with her. (Genesis 38:1-2 NET)

The episode of Onan and his failure to fulfill his responsibility to bring up children to his deceased brother (the Levirate marriage; Genesis 38:3-10).

Joshua defeated the king of Adullam during the Conquest (Joshua 12:15), and became one of the Shephelah (lowland or hill country) cities of the tribe of Judah (Joshua 15:35).

The cave of Adullam is associated with David. When he left Gath he went to Adullam before sending his parents to Moab for safety.

So David left there and escaped to the cave of Adullam. When his brothers and the rest of his father’s family learned about it, they went down there to him. (1 Samuel 22:1 NET)

In fact, David spent much time at Adullam. I suggest you read the entire account in 2 Samuel 23:13ff.

When the prophet Micah warned Judah about the coming Assyrian invasion he said,

…the leaders of Israel shall flee to Adullam (Micah 1:15 NET)

Just as David did about three centuries earlier.

One more point. Jesus was a descendant of David and Judah, both of whom had an association with Adullam (Revelation 5:5).

What a wonderful experience.

Which photo is today’s favorite? Take your pick.