Greek Orthodox church sells property. You may be surprised.

The Times of Israel ran an article Tuesday stating that,

The Roman Amphitheater and the hippodrome in the ancient Israeli coastal city of Caesarea have been sold off, in secret, to a mysterious overseas holding company by the Greek Orthodox Patriarchate.

Earlier we had read that the Greek Orthodox sold the land where about 1,500 owners of leased property in Jerusalem live.

The Greek Orthodox Church acquired some 4,500 dunams (1,110 acres) of real estate in the center of Jerusalem during the 19th century, primarily for agriculture. In the 1950s, just after Israel’s independence, it agreed to lease its land to the JNF for 99 years — with an option to extend. Even Israel’s parliament, the Knesset, is built on Greek Orthodox-owned land.

Almost anyone who has made a tour to Israel has visited the theater at Caesarea Maritima. The theater was built originally by Herod the Great but was added to and modified in later centuries. The seating capacity in its final stage was about 4,000.

This aerial photo shows the position of the theater (facing west) toward the Mediterranean Sea.

The reconstructed theater at Caesarea. Photo by Ferrell Jenkins.

Don’t let the new seating fool you. Most of the seating has been restored since the excavation in the early 1960s. Beginning here, groups continue to the palace of the procurators, the hippodrome, and the Crusader fortress at Caesarea. 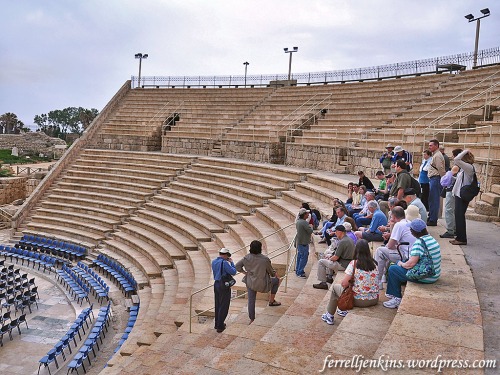 A tour group in the theater listens as the guide begins to tell them about the importance of Caesarea. Photo by Ferrell Jenkins.

Pilate inscription displayed in the Palace area at Caesarea. Photo by Ferrell Jenkins.

For more information about this inscription see here.

The two articles from The Times of Israel will provide much additional information. You may locate them here and here.

2 responses to “Greek Orthodox church sells property. You may be surprised.”