The dome of the Holy Sepulcher (Sepulchre) is easily recognizable to all visitors of the Old City of Jerusalem. It is the larger of two gray domes seen in the photo below. The smaller dome marks the traditional site of Calvary, the place where Jesus was crucified. The Church of the Holy Sepulcher was built by the Roman Emperor Constantine after his mother Helena visited Jerusalem. Murphy-O’Connor dates the dedication of the building to September 17, 335.

The aerial photo below shows Jaffa Gate at the bottom center. The Citadel is in the bottom right. The traditional Holy Sepulchre (larger gray dome) and the site of Calvary (smaller gray dome) are visible in the upper left corner of the photo. Evidence leads us to conclude that the Holy Sepulchre was outside the city wall at the time of Jesus. The Old City is now enclosed by a 16th century A.D. Ottoman (Turkish) wall. 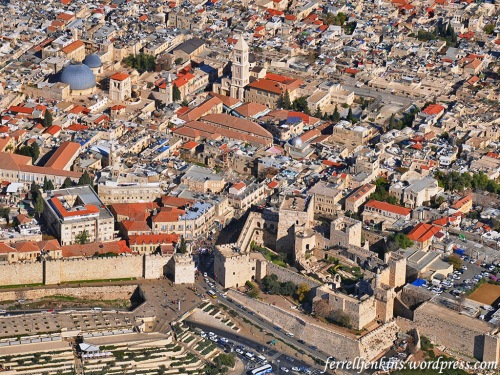 An edicule or small building within the church is said to cover the tomb in which Jesus was laid after the crucifixion, that is, the tomb of Joseph of Arimathea (Matthew 27:57-60). The photo below shows some of the metal scaffolding used to secure the structure in recent years.

For years it was known that the structure needed to be repaired. Finally, someone donated $1.3 million dollars to be sure the work could begin. 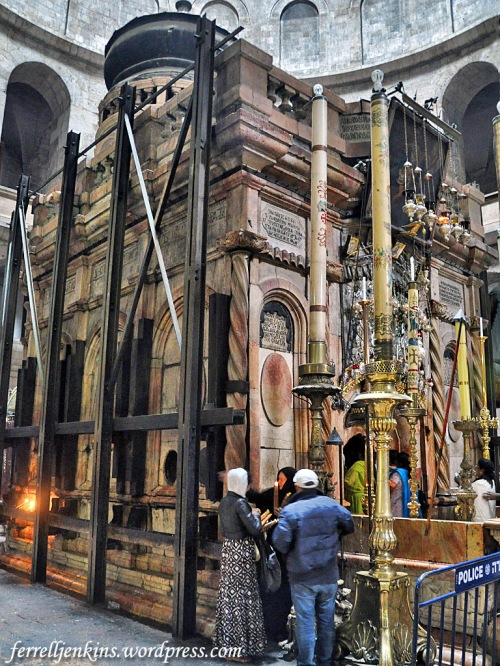 A view of the edicule with scaffolding to hold it up prior to the recent reconstruction work. Photo by Ferrell Jenkins.

A view of the edicule in late April, 2017, after the refurbishing. Multitudes line up daily to have an opportunity to go inside for a moment. Photo by Ferrell Jenkins. 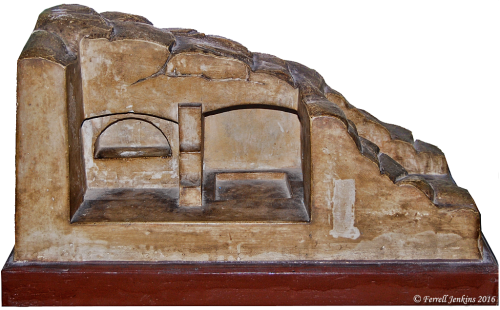 Cross section model of the tomb at the Holy Sepulchre in the Franciscan Museum, Jerusalem. Photo by Ferrell Jenkins.

Jerome Murphy-O’Connor, the late Catholic scholar, asks the question, “Is this the place where Christ died and was buried?” He answers, “Yes, very probably.”

But Murphy-O’Connor also describes vividly the situation one finds today.

One expects the central shrine of Christendom to stand out in majestic isolation, but anonymous buildings cling to it like barnacles. One looks for numinous light, but it is dark and cramped. One hopes for peace, but the ear is assailed by a cacophony of warring chants. One desires holiness, only to encounter a jealous possessiveness: the six groups of occupants—Latin Catholics, Greek Orthodox, Armenian Orthodox, Syrians, Copts, Ethiopians—watch one another suspiciously for any infringement of rights. The frailty of humanity is nowhere more apparent than here; it epitomizes the human condition. The empty who come to be filled will leave desolate, those who permit the church to question them may begin to understand why hundreds of thousands thought it worthwhile to risk death or slavery in order to pray here. (The Holy Land, 5th Ed., p. 49).

Our faith in the resurrected Christ does not depend on the actual tomb in which He was placed after being taken down from the cross. It depends rather on the testimony of those reliable witnesses who saw Him after the resurrection. Luke reports that eyewitness testimony (Luke 1:1-4). Here is what he says the women who went to the tomb on the first day of the week were told when they found the empty tomb.

He is not here, but has risen. Remember how he told you, while he was still in Galilee,  that the Son of Man must be delivered into the hands of sinful men and be crucified and on the third day rise.” (Luke 24:6-7 ESV)