Joseph was sold at Dothan

Dothan (Tell Dothan) is located about 11 miles north of Samaria on the east side of the modern highway. The impressive mound rises nearly 200 feet above the plain. The top of the Tell covers about 10 acres and the slopes cover almost 15 more.

Our first photo shows the view of Dothan to the east of the main highway. The mound is located in the region of Samaria in the fertile Dothan Valley.

A view of the west side of Tell Dothan. Photo by Ferrell Jenkins.

The best known Biblical event at Dothan is the selling of Joseph. The seventeen-year-old went from the Valley of Hebron where he lived with his father Jacob to Dothan searching for his brothers. Motivated by envy they put him into one of the pits, later sold him to a caravan of Ishmaelites, from Gilead, on their way to Egypt (Gen. 37:16-28). Joseph P. Free said in 1975:

“Shepherds still come from southern Palestine to the region of Dothan to water and pasture their flocks, as they did 4000 years ago in the days of Jospeh’s brother. Some doubt has been expressed (Kraeling) on the Biblical record of shepherds traveling out of ‘the vale of Hebron’ eighty miles or more to the Dothan area. One spring week-end we counted ninety flocks on the road from Jerusalem to the Dothan area; many came from the region between Hebron and Jerusalem” (ZPEB  2:160).

Dothan was in Jordan at the time of Free’s work; it is now in the Palestinian West Bank. This is one factor that has complicated any continued excavations.

The next photo is one I made in 1979. On the west side of the main highway, across from Tell Dothan there was a cistern that was used by the shepherds to water their flocks. I was looking carefully to locate the cistern again, but discovered that a strip of small stores had been built in the area.

Joseph’s brothers put him in a dry pit. The term pit may be used of a cistern, or a pit of some other sort. From the first time I saw this cistern I was reminded of the episode of Joseph. 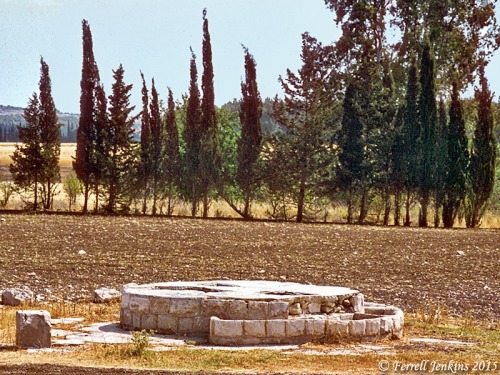 A cistern in the Dothan Valley in 1979. Photo by Ferrell Jenkins.

Next is a photo that I made of shepherds tending their flocks in the Valley of Dothan in 1979. 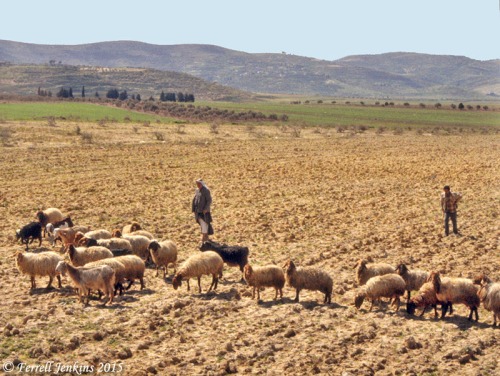 Shepherds tending their flock in the Valley of Dothan. Photo by Ferrell Jenkins.

The Pictorial Library of the Bible Lands includes some nice photos of Dothan, including an aerial shot and a different picture of a well near the Tell.

Ben-hadad and Elisha. A lesser known event at Dothan is that of Syrian king Ben-hadad who surrounded the city seeking to capture the prophet Elisha. Instead, the Syrians were struck blind by the Lord and led to Samaria by Elisha (2 Kings 6:11-23).

Archaeological Excavations
Excavations were conducted from 1953 to 1962 by Joseph and Ruby Free (Wheaton Archaeological Expedition). You may read Free’s own brief account of the excavations in the Zondervan Pictorial Encyclopedia of the Bible 2:157-60.

The excavations revealed that Tell Dothan was occupied as early as 3000 B.C. Bowls and juglets were discovered from the Middle Bronze Age (2000 – 1500 B.C.), showing that the city was occupied during the patriarchal period. Upper levels of the excavation provided evidence of the city from the 9th century B.C., the time of Ben-Hadad and Elisha.

I decided to follow the example of Master in Dothan: Remains from the Tell (1953-1964) in using the term Tell rather than Tel as shown on Israeli maps.

3 responses to “Joseph was sold at Dothan”