The other Aphek – of Asher

In the previous post we discussed Aphek in Sharon where the Philistines were encamped while the Israelites were about two miles away at Ebenezer.

There was also a town named Aphek (Afek) located within the territory of the tribe of Asher.

Then the boundary turns to Ramah, reaching to the fortified city of Tyre. Then the boundary turns to Hosah, and it ends at the sea; Mahalab, Achzib, Ummah, Aphek and Rehob– twenty-two cities with their villages. This is the inheritance of the tribe of the people of Asher according to their clans– these cities with their villages. (Joshua 19:29-31 ESV)

The aerial photo below shows Aphek of Asher in the Plain of Akko (Acco, Acre). The city of Haifa and the western end of Mount Carmel can be seen jutting out into the Mediterranean Sea. 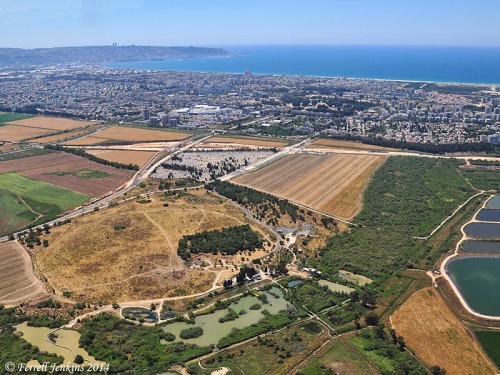 Aphek of Asher. View southwest toward the Bay of Haifa. Photo by Ferrell Jenkins.

In this photo we see the tel in the foreground with . the Ladder of Tyre in the distance to the north.

Aphek of Asher. View  north-northeast toward the Ladder of Tyre. Photo by Ferrell Jenkins.

Various sites with the same name can be confusing, but a little investigation helps to distinguish them.

Note: Thanks to the keen eye of A.D. Riddle for catching my mistake above. I did not recall circling the tel while we were flying. I had never been to Afek, so when the pilot pointed it out I began shooting continuously. I appreciate A.D. correcting this.

The photo below stretches all the way from Akko (Acre) to the Ladder of Tyre. You should be able to make out a white mark stretching into the sea in the distance.

The Mediterranean coast from Akko (Acre) north to the Ladder of Tyre. Photo: Jenkins.

For additional information about this stretch of land, see our earlier post here.

3 responses to “The other Aphek – of Asher”