Jesus taught the crowds from a boat

What kind of boat did Jesus sit in when he spoke parables to the multitudes gathered around the cove of the sower?

That same day Jesus went out of the house and sat beside the sea. And great crowds gathered about him, so that he got into a boat and sat down. And the whole crowd stood on the beach.  (Matthew 13:1-2 ESV)

We can not know details about the boat mentioned in this text. Only one boat from the Roman period has been discovered in the Sea of Galilee.

A boat that belonged to the Roman period (dated from the first century B.C. to the first century A.D.) was discovered buried in the mud on the shore of the Sea of Galilee in January, 1986, by two members of the Kibbutz Ginosar. Two years of drought made possible the discovery. The discovery was made south of the Kibutz and north of the Migdal, the traditional site of Magdala (or Tarichea in Greek).

The boat was most likely used for fishing and transport of people and cargo. It could have been sailed, or rowed by a crew consisting of four oarsmen and a helmsman. – (An Ancient Boat Discovered in the Sea of Galilee, a brochure once sold at the Museum.)

The boat is now displayed in the Yigal Allon Centre at Kibbutz Ginosar. 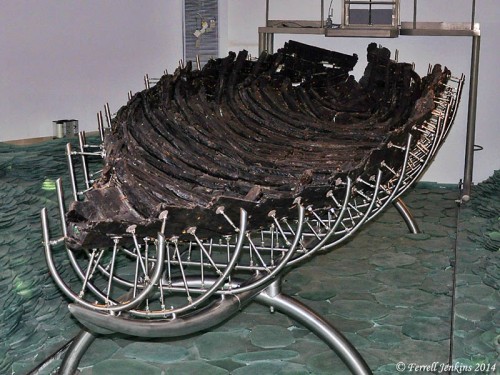 The Roman boat discovered in the Sea of Galilee in 1986. Photo by Ferrell Jenkins.

The photo below shows the side view of the boat. The display on the wall informs us that,

The boat is made mostly of oak and cedar, together with other types of wood, some recycled from disused boats. Thus far, laboratory tests have found eleven types of wood in the boat. Some were used to build the hull and others were added in smaller pieces later, to replace missing parts or repair faulty ones. The result is an intricate wooden patchwork vessel. 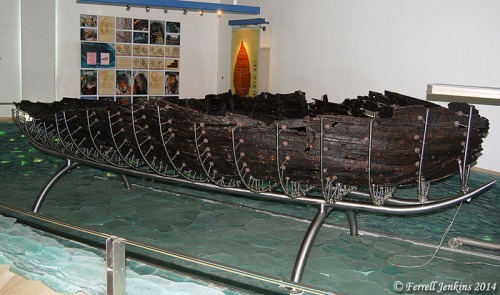 The Roman boat displayed in the Yigal Allon Museum. Photo by Ferrell Jenkins.

A pottery lamp was found inside the overturned boat, and a cooking pot was found outside the boat near the prow. These vessels, along with some nails from the boat, are displayed at the museum. 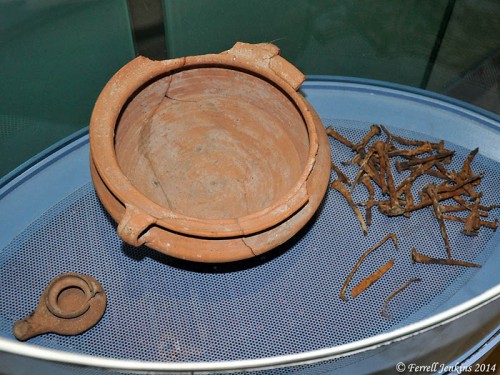 Pottery found in association with the boat, and nails from the boat. Photo by FJ.

At first the boat was placed in a tank in a temporary building while the conservation took place. It is now beautifully displayed in the Yigal Allon Centre, a museum at Kibbutz Ginosar on the east shore of the Sea of Galilee. 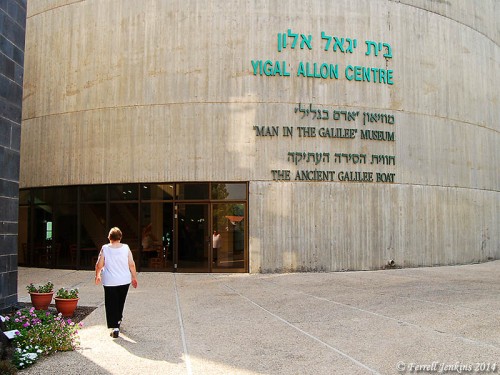 Entrance to the Yigal Allon Centre where the Roman boat is displayed. Photo by FJ.

The boat used by Jesus and the disciples would have been larger (John 6:22; Mark 4:38). But on some occasions Jesus had a boat standing ready for Him (Mark 3:9). Perhaps one like this one.

The story of the discovery of the boat is told by Shelly Wachsmann in the Biblical Archaeology Review (14:05; Sept/Oct 1988). This little tidbit might be of interest here:

On Sunday [February 9, 1986], we were startled to read newspaper reports of a wreck from Jesus’ time that had been discovered in the Sea of Galilee. Somehow the news had leaked. By Monday the press was writing in front page stories about the discovery of the “boat of Jesus.”

The media hype was soon overwhelming. The Ministry of Tourism actively promoted the “Jesus connection” in the hope of drawing pilgrims to Israel. In Tiberias, Ultra-Orthodox Jews, fearful that excavation of the boat would promote Christian missionary work, demonstrated against it.

During the Jewish War in Galilee the Roman Emperor Vespasian made headquarters in Tarichea (= Magdala) for a period of time. The Romans engaged the Jews in a fierce naval battle. The outcome was not good for the local residents. I suggest you consult Josephus’ Wars of the Jews, book 3, for details. Notice this brief account of the outcome.

529 but as many of these were repulsed when they were getting ashore, they were killed by the arrows upon the lake; and the Romans leaped out of their vessels, and killed a great many more upon the land: one might then see the lake all bloody, and full of dead bodies, for not one of them escaped. 530 And a terrible stink, and a very sad sight there was on the following days over that country; for as for the shores, they were full of shipwrecks, and of dead bodies all swelled; and as the dead bodies were inflamed by the sun, and putrefied, they corrupted the air, insomuch that the misery was not only the object of pity to the Jews, but to those who hated them and had been the authors of that misery. 531 This was the upshot of the naval battle. The number of the slain, including those who were killed in the city before, was six thousand and five hundred. (Jewish Wars 3:529-531)

A mosaic with a similar boat had been found earlier at nearby Magdala. The original has been displayed at Capernaum for many years, but it was in poor condition the last time I saw it there. A modern replica, pictured below, may be seen in the Yigal Allon Centre. 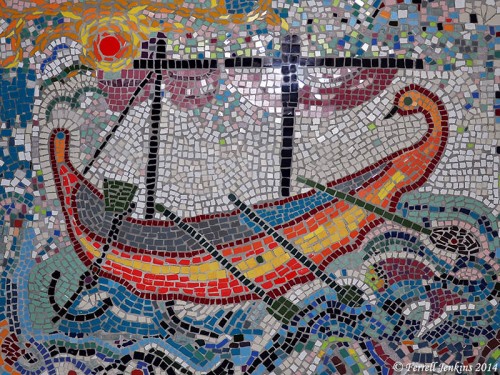 Replica of a mosaic discovered at Magdala. Photo by Ferrell Jenkins.

Boats played an important role in life around the Sea of Galilee in the time of Jesus. They were important in His ministry as well.

2 responses to “Jesus taught the crowds from a boat”