For the past week my wife and I have been traveling in Europe, revisiting some of the places we have enjoyed with groups over the years. Berlin is one of those places. We did some of the typical sightseeing, but the main visit was the museums with Ancient Near Eastern collections.

The Egyptian collection formerly was in the west, but now is housed in the Neues Museum in the building on the left of the photo below. Considerable construction is underway in the area. The former entry to the Pergamum Museum is closed. The red sign in the distance points to the temporary entry. Crowds are so large that people wait in line for four hours or more to buy at ticket and gain admission to the Museum. The only way to avoid this is to purchase a ticket online with a 30 minute time span for admission. I purchased a two day Museum pass after I arrived in Berlin and then made an appointment online for two different days. A single entry costs about 13 Euro (a little under $20 per entry). 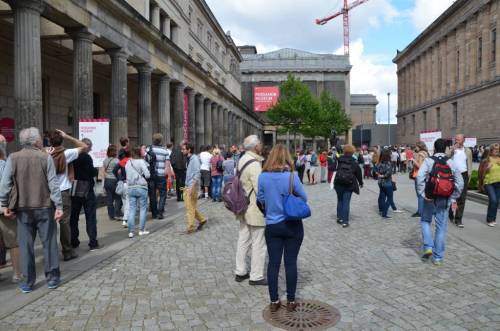 Crowds waiting in line to enter the Pergamum Museum. Photo by Ferrell Jenkins.

The Pergamum Altar already has some scaffolding in place. At the end of September the exhibition will close for __________ years (you know about government projects).

The visit was somewhat disappointing because of the appointment requirement, but mostly because portions of the Museum are closed. Whole galleries pertaining to the the Greco-Roman world are not open. The great Ishtar Gate from Babylon is open, and the Miletus Marketgate, which was covered with netting the last time I was in Berlin, is now one of the nicest exhibits. The halls dealing with Babylon, Assyria, and the Hittites were open.

Later I hope to share some representative photos with you, but I confess that I am traveling with a Samsung Tab 4 and have had difficulty getting the single photo above loaded into the blog. I refused to pay the $20+ a day to be online at the hotel. I only ate at one place that offered time online, and they could not locate the card with the passport. 😦

We are in Paris now and I have Wi-Fi at the hotel. The Louvre is closed on Tuesdays, so I went to the Tourism office and purchased tickets to the museum in order to avoid the long lines the next two days. The tickets here are under $20 per entry.

If any reader has experience in loading photos from an Android tablet into WordPress I would be glad to hear about it. Who knows, maybe I will be able to load a second photo.

4 responses to “Traveling in Europe”