The first excavations ever have begun at the ancient city of Derbe. Derbe was visited by the Apostle Paul and Barnabas on the first preaching journey (Acts 14:20-21). Paul returned with Silas on the second journey (Acts 16:1).

Today our tour group visited Kerti Hüyuk, the site widely believed to be ancient Derbe. Several squares were opened on the top of the mound in 2013. 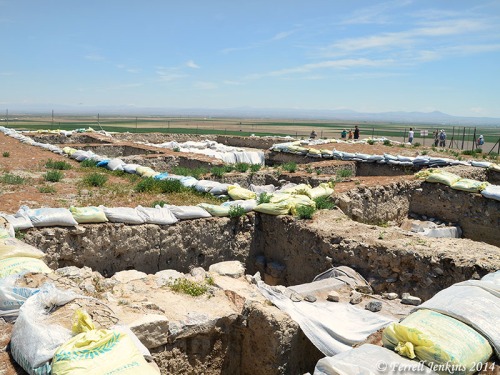 Recent excavation at Derbe. Photo by Ferrell Jenkins, May 14, 2014.

So far the excavations have unearthed ancient wall remains. “There are brick and stone walls. We found graves and skeletons inside the walls. Anthropologic works will reveal the ages and genders of these skeletons and how they died. Works show us that this place received a lot of damage, and most architectural materials were removed for use in other places. This place was seen as a kind of stone quarry. We found the remains of a church-like structure, and we believe that we will find new structures as excavations continue. Even these remains alone show us that a Christian society lived in this tumulus,” Tekocak said.

There is no hint as to the age of the church-like structure.

See the report in Hurriyet Daily News here. We look forward to future reports from Derbe.