Seal from time of Sargon II found at Roman-era site

Haaretz, an Israeli newspaper, reports on the discovery of a seal dating to the time of Sargon II, king of Assyria (722-705 B.C.), at a Roman-period site in northern Israel. This is a rather unusual find to have been uncovered at the site of Omrit. The excavators at the site believe it to be the site of a temple dedicated to the Emperor Augustus.

The seal, the older of the two artifacts, was found behind the wall of the earliest shrine, within a layer of filler between an internal and external wall. Archaeologists are unaware of how the seal ended up at the site, as the temple was built roughly 700 years before [this should read after] the seal was created. The layer of filler also contained small glass tools and other objects which were apparently taken out of the temple during construction.

Prof. Ziona Grossmark of Tel-Hai Academic College in northern Israel conducted research on the seal, along with Baruch Brendl from the Israel Antiquities Authority. “The seal depicts a battle between a winged figure and a bull standing on its hind legs,” says Grossmark, adding that “comparative research allows us to date it to the time of Sargon II, an Assyrian king who ruled between 722 and 705 B.C.E. and completed the conquest of ancient Israel. The seal was apparently brought to Israel by one of his subjects. What happened to the seal after that remains a mystery, but ancient seals like this one are very rare − only a few of this nature have been found in remains from the Roman period, mostly in graves and temples.”

According to Grossmark, “the seal was a means of identifying its owners, similar to a modern ID card. Seals were in use in the Galilee from the third millennium B.C.E. until about the fifth century B.C.E. They were used mostly during the period during which clay tablets were used for writing, until the introduction of papyrus or leather scrolls. Some say that in later periods, seals were still significant, but they were not used for their original purposes.”

The seal discovered was perfectly preserved, and is still in the process of research and cataloguing. Grossmark says that for archaeologists and historians, it is one of the most beautiful seals ever found.

You may access the Haaretz article by Eli Ashkenazi here. The article does not include a photo of the seal, but you may be able to see the seal by using this link.

Our photo below was made from Omrit with a view NW of the northern Hula Valley. Omrit is located about 2½ miles southwest of Banias (Caesarea Philippi). 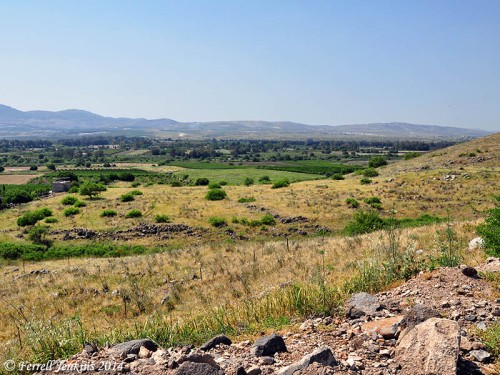 View NW from Omrit of the northern Hula Valley. Photo by Ferrell Jenkins.

See our earlier discussions about Sargon II and Isaiah 20, here and here.