Visualizing Isaiah 3: a skirt of sackcloth

Isaiah describes the luxurious life of the women of Jerusalem in vivid terms. The prophet was definitely not politically correct.

16 The LORD said: Because the daughters of Zion are haughty and walk with outstretched necks, glancing wantonly with their eyes, mincing along as they go, tinkling with their feet,
17 therefore the Lord will strike with a scab the heads of the daughters of Zion, and the LORD will lay bare their secret parts.
18 In that day the Lord will take away the finery of the anklets, the headbands, and the crescents;
19 the pendants, the bracelets, and the scarves;
20 the headdresses, the armlets, the sashes, the perfume boxes, and the amulets;
21 the signet rings and nose rings;
22 the festal robes, the mantles, the cloaks, and the handbags;
23 the mirrors, the linen garments, the turbans, and the veils.
24 Instead of perfume there will be rottenness; and instead of a belt, a rope; and instead of well-set hair, baldness; and instead of a rich robe, a skirt of sackcloth; and branding instead of beauty. (Isaiah 3:16-24 ESV)

When the Assyrians captured Lachish and other cities of Judea they took some of the people captive. Something similar must have happened when the Babylonians took captive many of the citizens of Jerusalem in 586 B.C.

Our photo shows a portion of the relief Sennacherib left on his palace wall after the capture of Lachish. You may recognize that this is not the original now displayed in the British Museum. This replica is in the Israel Museum. Notice especially the women in the center of the bottom panel. 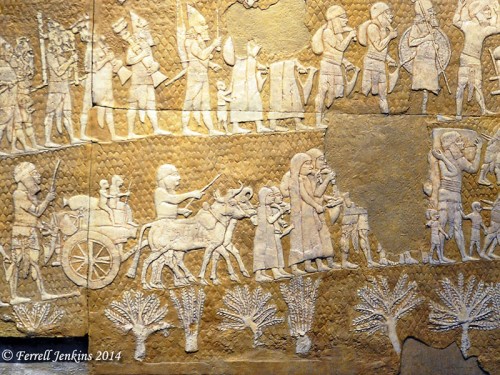 Here is the original of the same scene as it is displayed in the British Museum. Click the photo for a larger image. 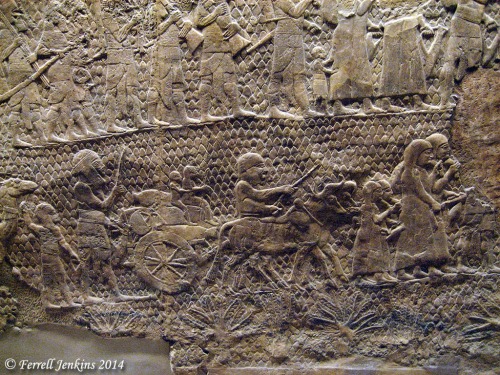 Sennacherib’s Relief in the British Museum. Photo by Ferrell Jenkins.

The women of the Shephelah were country women and the attire they are wearing may have been normal. The stylish women of Jerusalem would become like the plain women of the country and don a skirt of sackcloth.

The deportees are distinguishable by their appearance and dress. The women—adults and girls alike—wear a long, simple garment. A long shawl covers their head, shoulders and back, reaching to the bottom of the dress. The heads of both the adult men and boys are wound with scarves whose fringed ends hang down, covering the ears and reaching the level of their shoulders. A thick horizontal line below the belt probably marks the bottom of a sleeveless shirt. The garment has a fringed (?) tassel hanging between the legs, apparently attached to the bottom of the shirt. The men have short beards. Both men and women are barefooted. (The Conquest of Lachish by Sennacherib, 109).