Visualizing Isaiah: a booth in a vineyard

Because the events of the Bible took place in the Ancient Near East, we expect it to use illustrations from that world. Many of these cultural practices are different from those we know, but others are similar.

The prophet Isaiah describes what will happen to Jerusalem as a result of their sin.

And the daughter of Zion is left like a booth in a vineyard, like a lodge in a cucumber field, like a besieged city. (Isaiah 1:8 ESV)

Almost everyone has seen a fruit or vegetable booth along a highway during the picking season. Months later we may see that same booth in disrepair. In Biblical times, watchtowers and temporary booths were set up in fields to provide a moment of shade for the workers.

Our photo today was made a few miles east of Sardis (Revelation 3:1) in modern Turkey. It is near a vineyard and set amidst another crop. One can easily image it still standing in disarray when the winter rains come. 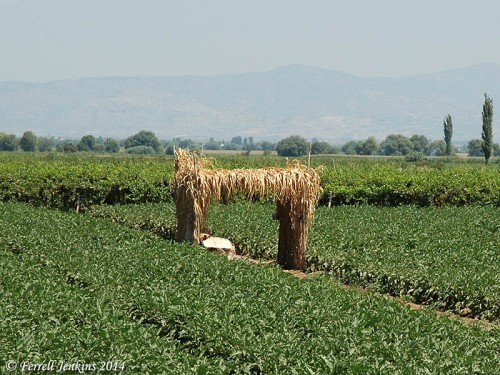 A temporary booth in the field, east of Sardis. Photo by Ferrell Jenkins.

The Judeans of the 8th century B.C. could easily visualize what Isaiah was describing, and those who were living when the city was destroyed by the Babylonians would see it as a fact.

Jeremiah’s lament over the city after 586 B.C. illustrates the point:

How lonely sits the city that was full of people! How like a widow has she become, she who was great among the nations! She who was a princess among the provinces has become a slave. (Lamentations 1:1 ESV)

4 responses to “Visualizing Isaiah: a booth in a vineyard”