A few columns of the Palace of the Procurators have been restored at Caesarea. The late Jerome Murphy-O’Connor describes the lower level of the Palace.

From the west colonnade one can look down to the sea shore at a point where its dominant feature is a rectangular rock-cut pool (35 x 18). There are channels to the sea on both sides. A square statue base can be discerned in the middle. The colonnaded pool was originally the centerpiece of a two-storey building (83 x 51 m) which surrounded it on all sides. Presumably it was here that the Roman procurators lived. Wave action and the activities of stone robbers have ensured that virtually nothing remains. A staircase in the north-east corner gave access to the upper level. (The Holy Land, Fifth Edition, p. 243)

Our photo below shows this area. In the foreground you will see portions of some mosaics. 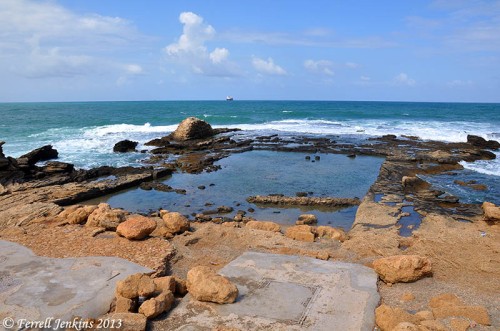 The lower level of the Place of the Procurators. Photo by Ferrell Jenkins.

This was not a bad place for the Roman procurators to live a luxurious life while the Apostle Paul was held in custody nearby (Acts 23:23 – 26:32).

Procurators associated with Caesarea in the New Testament include…

The Jewish rulers associated with Caesarea include…