A little over a year ago I visited the Protestant Cemetery on Mount Zion in Jerusalem. Shortly thereafter a series of articles were posted about some of the persons buried there. See here for Spafford; here for Starkey; here for Schick; here for Fisher.

My friends Trent and Rebekah are currently students at the Jerusalem University College that adjoins the cemetery. In fact, one enters the locked cemetery gate through JUC property. Unfortunately, it would be possible for a person to enter the cemetery from the southwest corner where there is no fence.

Trent reports vandalism of some of the tombs with crosses last Sunday.

I’m sure you know of the “price tag” policy and campaign. [Yes, see here.]

At some point on Sunday, not sure exactly when, vandals said to be associated with a Price Tag group entered the cemetery (not hard to do from the back/side) and smashed multiple tombstones which were bearing crosses. They also damaged at least one tombstone with Arabic writing.  I checked all the graves which you have written about on the blog (at least what I could find on the blog).  The only grave with damage seemed to be Clarence Fisher.  After talking with Dr. Wright, he says this tombstone was actually damaged in a similar attack about six months ago (photo attached).  The stone has been set back somewhat upright on the grave.

The incident on Sunday was incorrectly reported by some outlets as the nearby Catholic Cemetery.

Here is Trent’s photo of the broken headstone over Clarence Fisher’s grave. 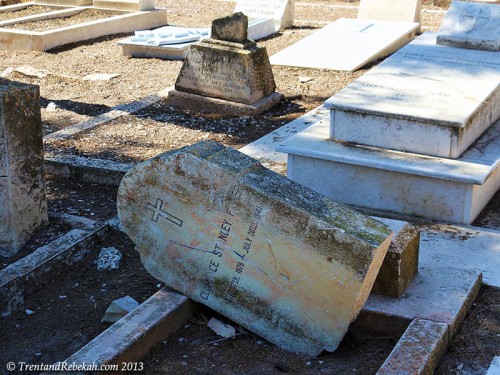 Another photo shows damage to the tomb of Edmund Schmidt, a German consul to Jerusalem. 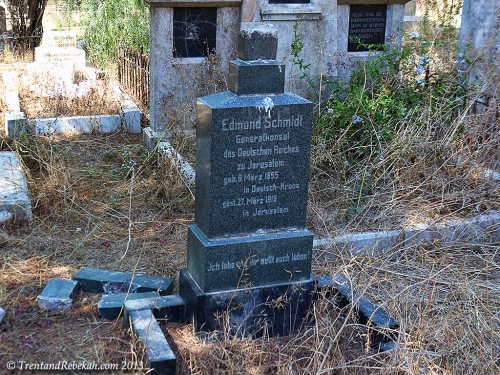 In browsing my photos of September, 2012, I noticed that the cross on this tomb had already been broken and poorly repaired. In the photo above you will see the three pieces of the cross to the left of the headstone. 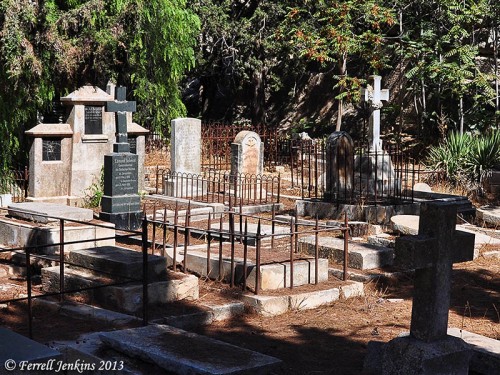 I also noticed that numerous crosses had been broken.

The apostle Paul spoke of himself as one who previously destroyed what he presently was rebuilding.

For if I rebuild what I tore down, I prove myself to be a transgressor. (Gal 2:18 ESV)

Ynet reports here and here the arrest of four Jewish youths in this episode.

6 responses to “Vandalism in Protestant Cemetery on Mount Zion”