Looting and vandalism in Petra

Looting and vandalism of historic or archaeological sites is nothing new. We have reported on vandalism in Israel, but especially in the war-torn countries of Syria and Iraq.

Heritage Daily has an article here on looting and vandalism at Petra. Petra was designated a UNESCO World Heritage Site in 1985. Archaeologists from Brown University have been working in Petra since 2009. They have been able to photograph excavated area each year. Now they report on signs of recent vandalism. The article says,

The damage caused by looting is nothing new and some of the more iconic buildings at Petra bear witness to this. A giant urn carved above the entrance to the Monastery bears the marks of hundreds of gunshots. The local Bedouin tribesmen living in and among the ancient ruins say the damage was caused when local men would open fire with rifles, seeking the loot thought to be inside the urn which is actually made of solid stone.

Heritage Daily has established from sources at Brown University that they are lobbing for additional security at the site and robust investigation to target the individuals concerned. However lack of funds for the Petra Archaeological Park and the isolated rugged area is hindering this work.

There is a considerable amount of natural wear over the centuries. In some cases we must imagine how the stones looked when they were carved by the Nabateans who lived in the area. 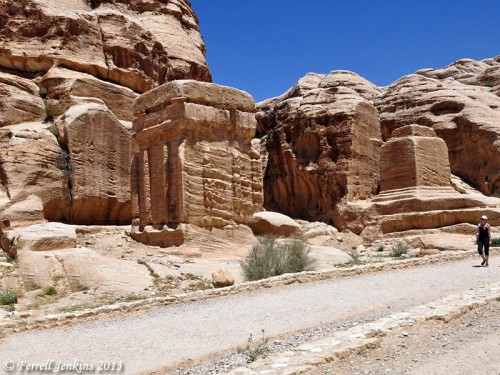 Nabatean Djinn blocks at Petra. Some sources refer to these as god-blocks.Photo by Ferrell Jenkins.

I have noticed erosion in the structures cut from the beautiful sandstone at Petra since my first visit in 1967. Some of this may have been caused by those who fill little bottles with the various colors of sand to sell to the tourists. 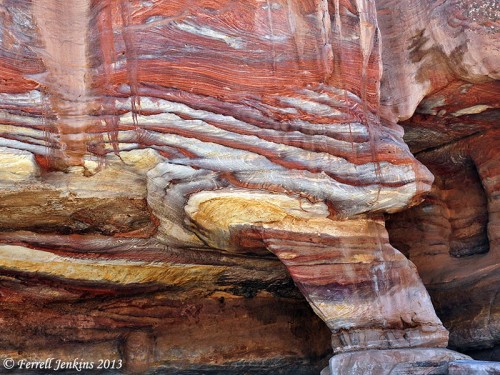 Natural erosion is evidenced in these structures cut from the beautiful sandstone structures of Petra. Photo by Ferrell Jenkins.

This territory was once inhabited by the Biblical Edomites, but the structures we see today were carved from stone by the Nabateans who inhabited the area from about the fourth century B.C. to the early second century A.D.

One of the most famous Nabatean rulers was Aretas IV (about 9 B.C. to A.D. 40). It was during his reign, which extended at far north as Damascus, when Paul escaped Damascus (2 Corinthians 11:32-33). See here.