Tel Rekhesh may be Anaharath

The Jewish Press reported here on the discovery of a Canaanite cult altar at Tel Rekhesh, an archaeological mound east of Mount Tabor. Archaeologists from the University of Tenri, Japan, and the Institute of Archaeology of Galilee Kinneret Academic College, have been working together at the site for the past six years. I have had the site on my “wish list” for the past three years, but have not yet visited the it.

The same excavations also revealed large parts of a Jewish farmhouse dating back to the Second Temple. Researchers were able to establish that this was a place of Jewish dwellers based on typical stone tools, oil lamps and coins minted in the city of Tiberias.

“The diggers received a big surprise,” said Chairman of the Institute of Archaeology of Galilee Kinneret Academic College Dr. Mrdechai [Mordechai] Avi’am. “In the ruins of the second floor of the farmhouse, they discovered a Canaanite cult statue, similar to a statue that stood in the sanctuary of a temple which is yet to be located.”

“Similar stones have been discovered in a number of Canaanite sites, such as Hazor,” Dr. Avi’am said. “The same stone was later used as part of a doorframe in one of the rooms of the Jewish structure. This is the unique development of archaeological hills in Israel, where successive generations mingle ritual objects on their way from the world of the Canaanite mythology to monotheism.”

This region is located in the territory allotted to the tribe of Issachar (Joshua 19:17-23). Y. Aharoni identified Tel Rekhesh with the Biblical site of Anaharath (Joshua 19:19). 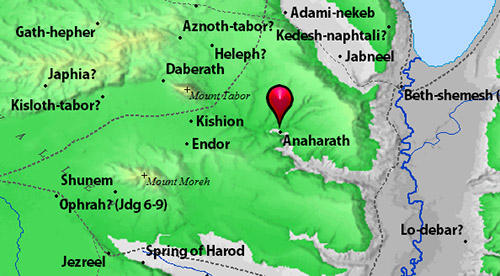 In a page About the Site, the web page says,

Some of the findings from the site, collected by local people, are now exhibited in the archaeological museum in the Kibbutz Ein-Dor, some 5 km from Tel Rekhesh.  The collection includes a fragment of Egyptian stela, a clay model of a temple, and complete pottery from various periods.

The photo below is one I made earlier this year. At least seven of the artifacts displayed in this case are identified as being from Tel Rekhesh. Most of them are used in food preparation. The shrine in the center (“model of a temple”) is a replica. I failed to get a photo of the Egyptian stela fragment.

At least 7 of the artifacts displayed in this case at The Ein Dor [En-dor, Endor] Archaeological Museum are from Tel Rekesh. Photo by Ferrell Jenkins. Click to enlarge.

The web site for the Tel Rekhesh project is available here, but the content is not current. Todd Bolen includes a photo of Tel Rekhesh in the Tabor River valley here.