Back in May, my friend Dan and I visited the site of Ashdod-Yam. The site is located a little over 3 miles NW of Tel Ashdod. Tel Ashdod, the city mentioned in the Old Testament, is difficult to visit. My young friends, Trent and Rebekah, mentioned visiting Ashdod a few weeks ago. The site, “now a cow pasture,”  is enclosed by a highway and railroad track on one side and an industrial park on the other. Finding the right hole in the fence is not easy.

Sargon II took the city of Ashdod in 712/711 B.C., an event mentioned in Isaiah 20:1. By Roman times Ashdod consisted of two cities, the coastal town of Azotus Paralios and the inland town of Azotus Mesogeius. (There is too much history for inclusion here.) 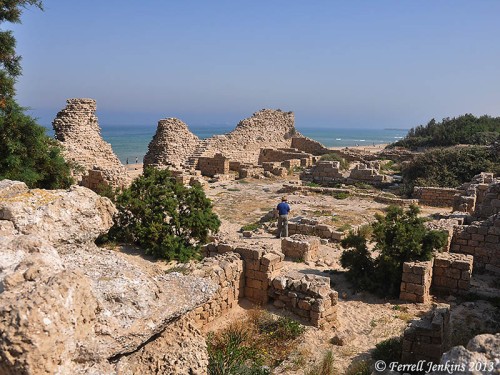 The citadel, an early Islamic and Crusader fortress, at Ashdod-Yam with a view north. Photo by Ferrell Jenkins.

Azotus is mentioned only once in the Bible. After the baptism of the man of Ethiopia, the evangelist Philip “found himself at Azotus.”

But Philip found himself at Azotus, and as he passed through he preached the gospel to all the towns until he came to Caesarea. (Acts 8:40 ESV)

Except for the fortress, the large site of Ashdod-Yam resembles sand dunes. A joint excavation conducted by the Institute of Archaeology of Tel Aviv University and the Institut für Alttestamentliche Wissenschaft of the Leipzig University has just completed the current season. The excavation web site may may be accessed here. 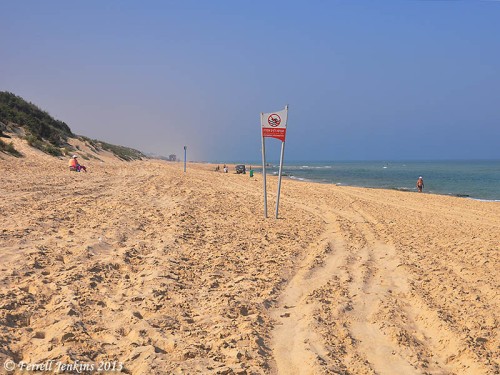 Ashdod-Yam. A view south toward Ashkelon. The large tel can be seen sloping down on the left of the photo. Photo by Ferrell Jenkins.

Below is a photo of the name of Azotos Paralios in the 6th century Madaba mosaic map.

Azotos Paralios is portrayed on the Madaba mosaic map. Photo by Ferrell Jenkins.