Calf and sanctuary found at Ashkelon

Professor Lawrence E. Stager of Harvard writes about the discovery of the silver calf at Ashkelon in the summer of 1990.

In the waning days of the season, on the outskirts of the Canaanite city, we excavated an exquisitely crafted statuette of a silver calf, a religious icon associated with the worship of El or Baal in Canaan and, later, with the Israelite God, Yahweh. The calf lay buried in the debris on the ancient rampart that had protected the city in the Middle Bronze Age (c. 2000–1550 B.C.). (BAR 17:02 (March/April 1991), ed. Hershel Shanks (Biblical Archaeology Society, 1991).

In Life in Biblical Israel, by King and Stager, the calf is dated “around 1600 B.C.E. (p. 173). This bull calf and the pottery shrine in which it was found is now in the Israel Museum in Jerusalem. 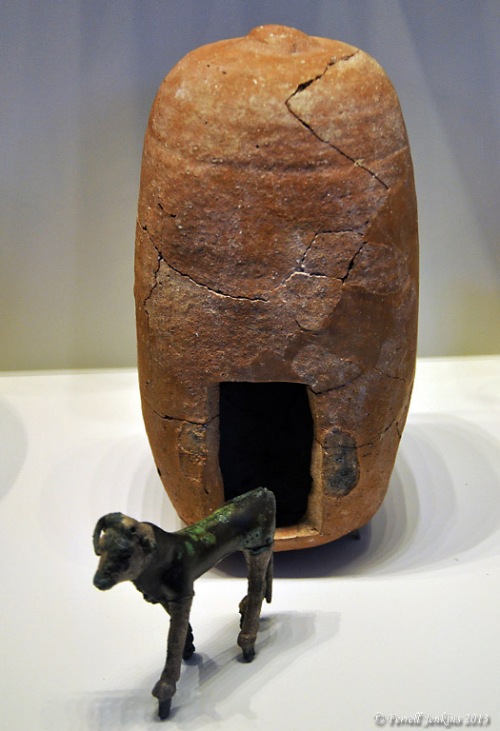 Bronze and silver calf and sanctuary found at Ashkelon. Photo by Ferrell Jenkins.

Bible students recall the golden calf made by Aaron at Mount Sinai (Exodus 32:4).

Stager calls attention to a significant reference in Hosea 13:1.

When Ephraim spoke, there was trembling; he was exalted in Israel, but he incurred guilt through Baal and died. And now they sin more and more, and make for themselves metal images, idols skillfully made of their silver, all of them the work of craftsmen. It is said of them, “Those who offer human sacrifice kiss calves!”  (Hosea 13:1-2 ESV)

The discoveries of archaeology often shed light on biblical accounts and help us to see the reality of them.

For a photo of a bull from the Samaria region, see here.

3 responses to “Calf and sanctuary found at Ashkelon”