Now when they had passed through Amphipolis and Apollonia, they came to Thessalonica, where there was a synagogue of the Jews. (Acts 17:1 ESV)

Thessalonica (called Thessaloniki now) is in biblical Macedonia. The area is still known as Macedonia, but is not to be confused with the modern country by that name. It is marked on maps of Greece as FYROM (former Yugoslav Republic of Macedonia). I know too little about the dispute to make any comments.

Paul wrote two letters to the church at Thessalonica while he was at Corinth. Aristarchus, a Macedonian of Thessalonica accompanied Paul on the voyage to Rome (Acts 27:2). When Demas forsook Paul he went to Thessalonica (2 Timothy 4:10).

The photo below shows excavated ruins of the 2nd-3rd century A.D. Roman Forum in the center of the modern city of Thessalonica. Fant and Reddish comment on the Forum:

Extensive, ongoing excavations are being conducted in this area. Likely the same site was the location for the Hellenistic agora as well. The forum originally covered two extensive terraces. The forum originally covered two extensive terraces. The one to the north contained a large courtyard surrounded on four sides by two-story stoas; to the rear of the stoa on the east side stood the odeion, originally a theater for music and performances, later converted into an arena for gladiatorial contests. (A Guide to Biblical Sites in Greece and Turkey, 137). 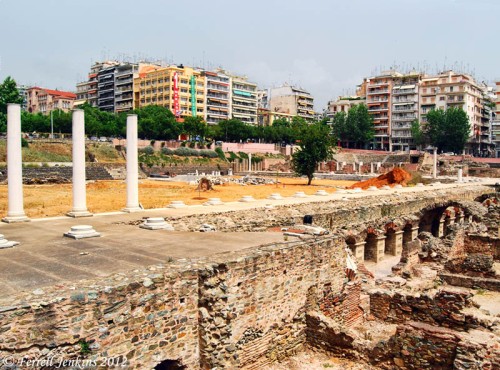 Roman Forum in the center of Thessalonica. Photo by Ferrell Jenkins.

I think if you click on the photo to enlarge it, you will see the odeion to the right of the image.