The volcanic island of Santorini, also known as Thira, is a popular stop on Aegean cruises. Eruptions are known to have occurred about 1600 B.C., 1475 B.C., and in the twelfth century B.C. The cruise ships float around in the crater and the passengers are taken by tinder to a place where they have a choice of cable car or donkey to reach the rim. 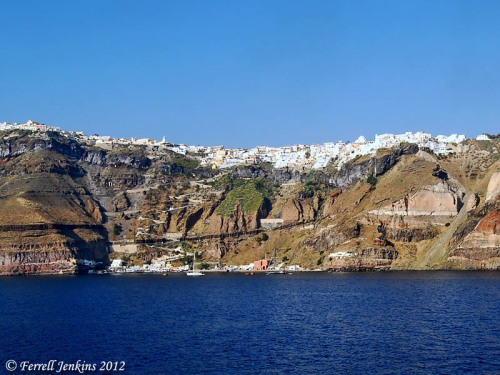 A view from inside the crater at Santorini. The town of Fira sits perched upon the rim of the volcanic crater. Photo by Ferrell Jenkins.

I have been to Santorini several times on my Steps of Paul and John tours. It is a “necessary” stop on the cruise that allows visits to the biblical sites of Patmos, Rhodes, and Crete. Prior to 2005 a visit to the archaeological site of Akrotiri was worthwhile. A brief description of Akrotiri is given at Wikitravel here.

Akrotiri, in the south, a roughly 3,500 year old Minoan town preserved in volcanic ash like Pompeii, is one of Santorini’s “must-sees”. The excavation site is covered by a roofing system, which makes it something that you can comfortably visit no matter what time of year. The ruins, are extremely well preserved. Streets, buildings, stairs and even second floors of buildings are still visible. Visitors can stand in the ruins and look at Minoan pottery and frescoes, and with a little imagination, feel what it would have been like to live in ancient Greece. Due to an accident in September 2005, the excavation site is still closed to the public.

Word comes from the China Post that the archaeological site reopened last Friday. I look forward to visiting it again next month. I am sure I recall making slides there, but have been unable to locate any in my files.

The Athens National Museum has a wonderful exhibit of fresco’s and other artifacts from Akrotiri on the second floor of the museum. The photo here is of the Antelopes fresco. 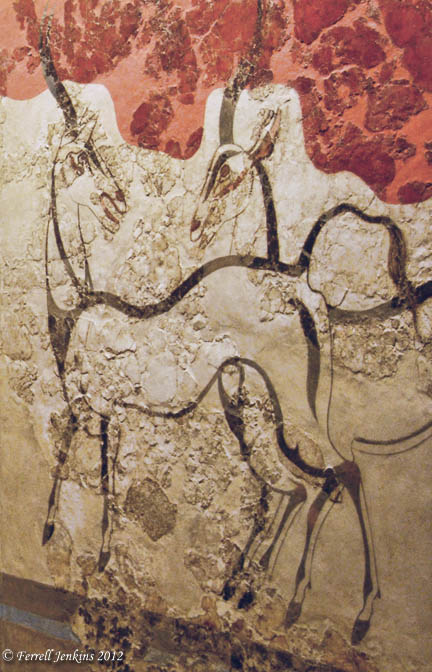 The Antelopes fresco from Akrotiri displayed in the Athens National Museum. Photo by Ferrell Jenkins.

Professor Hans Goedicke proposed that the Exodus and the drowning of the Egyptian army was an historical event in 1477 B.C. According to the theory, a tsunami produced by volcanic eruption in the Mediterranean was responsible for the flooding that drowned the Egyptian Army. See Shanks, “The Exodus and the Crossing of the Red Sea, According to Hans Goedicki.” BAR 07:05 (Sept/Oct 1981). The dating does not fit what I understand to be the date of the Exodus, but I am unable to comment further on the theory at this time.