Reclining in the Upper Room

Each of the Gospels tell us something about the last supper Jesus ate with His disciples prior to the crucifixion. Matthew says,

Now on the first day of Unleavened Bread the disciples came to Jesus, saying, “Where will you have us prepare for you to eat the Passover?” said, “Go into the city to a certain man and say to him, ‘The Teacher says, My time is at hand. I will keep the Passover at your house with my disciples.'”  And the disciples did as Jesus had directed them, and they prepared the Passover.  When it was evening, he reclined at table with the twelve. (Matthew 26:17-20 ESV)

Both Mark and Luke inform us that the room was a “large upper room furnished” (Mark 14:15; Luke 22:12). Leon Morris comments on these arrangements.

The householder would show them a large upper room furnished. This last word is literally ‘spread’ and probably means that there would be couches ready with coverings spread over them (Moffatt translates ‘with couches spread’). They followed instructions and prepared the meal. (Morris, Luke: An Introduction and Commentary. Tyndale New Testament Commentaries, 323.)

There is in the portion of the Old City of Jerusalem called Mount Zion (which really isn’t) a room known as the Cenacle (Latin) or the Room of the Last Supper. The tradition goes back further, but the building as we see it today dates back to the time of the Franciscans in 1335 A.D. (Murphy-O’Connor, The Holy Land). 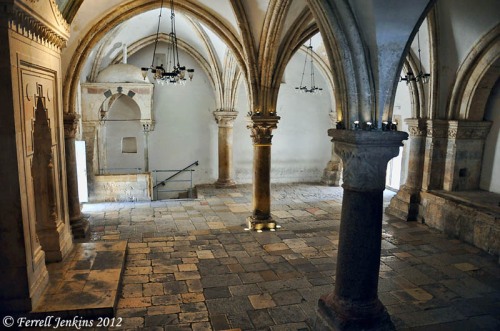 The traditional room of the Last Supper on Mount Zion. Photo by Ferrell Jenkins.

Jim Fleming has specialized in recreating the world of the Bible for modern students. He says,

Rather than picturing small round or rectangular standing tables, these words would have called to mind a room with a large U-shaped triclinium dining table with cushions.

Persons lying down to eat would recline around the outside of the table with the upper body supported on their left elbow. At large tricliniums the food was served from the center of the U-shaped table. (The World of the Bible Replicas)

Here is a drawing of a typical Roman triclinium. 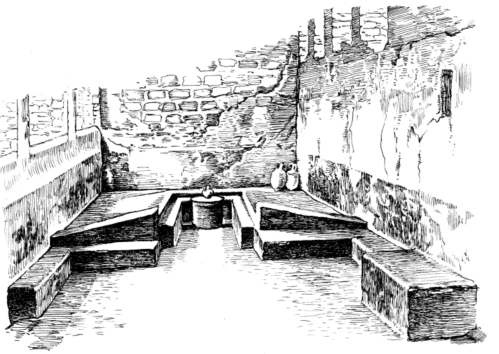 And here is a photo of a reconstructed triclinium at the Explorations in Antiquity Center in LaGrange, Georgia [Take the kids with you.]. The photo is courtesy of David Padfield. 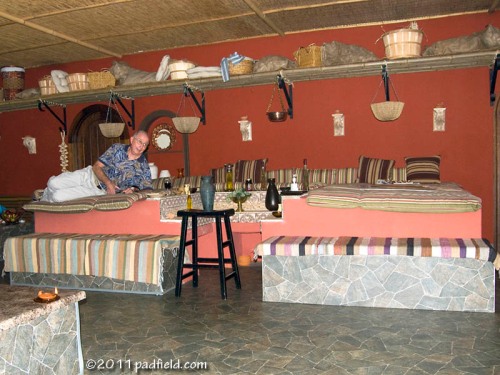 Triclinium at Explorations in Antiquity Center. Photo by David Padfield.

Some of our English versions correctly use the term recline, reclined, or reclining, in the passages relating to eating meals in New Testament times. The KJV and the NKJV use “sat down” or similar terminology. Knowing that the concept of reclining is not understood by modern readers, some translations use a dynamic equivalent such as “took his place at the table” (CEB; NET, with a note of explanation).

Remember what you have learned here the next time you come across one of these references in your reading of the New Testament.

For a summary of the last week of the ministry of Jesus prior to the crucifixion, see here.