Evil-merodach came to power in Babylon upon the death of his father Nebuchadnezzar in 562 B.C. There are only two references to him in the Bible, and these are parallel accounts. Evidence suggests that Jehoiachin (Jeconiah, Coniah), the king of Judah who was taken to Babylon in 597 B.C., was treated like a king in exile during most, or all, of his time in Babylon. The kindness of Evil-merodach receives special attention.

27 And in the thirty-seventh year of the exile of Jehoiachin king of Judah, in the twelfth month, on the twenty-seventh day of the month, Evil-merodach king of Babylon, in the year that he began to reign, graciously freed Jehoiachin king of Judah from prison. 28 And he spoke kindly to him and gave him a seat above the seats of the kings who were with him in Babylon. 29 So Jehoiachin put off his prison garments. And every day of his life he dined regularly at the king’s table, 30 and for his allowance, a regular allowance was given him by the king, according to his daily needs, as long as he lived.  (2 Kings 25:27-30 ESV; cf. Jeremiah 52:31-34)

It is interesting that we have a biblical record mentioning Evil-merodach’s treatment of Jehoiachin (about 560 B.C.), and we have archaeological evidence of similar treatment at an earlier period. Four tablets mentioning Jehoiachin and his sons date to the period 595–570 B.C.

These tablets record rations that were given to the exiled king, his sons, and eight men of Judah. The one shown here is usually displayed in the Museum of the Ancient Near East (Vorderasiatische Museum), also called the Pergamon Museum, in Berlin (VAT 16378). 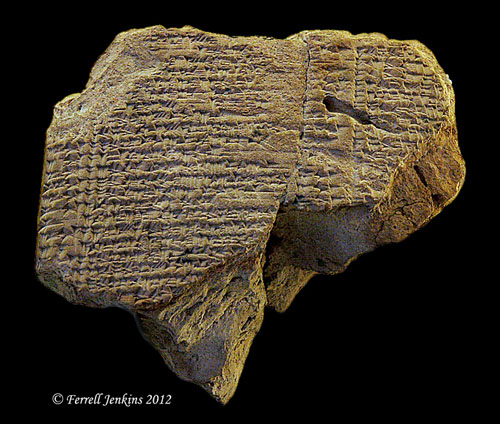 A trip to Berlin is worthwhile for many reasons, but one of the best is to visit the Museum of the Ancient East. Even though it could stand some revisions, you should find my Biblically Related Artifacts in the Museums of Berlin helpful. It is available in PDF here.

Here  is what I wrote about this tablet:

“Jehoiachin (Jeconiah, Coniah) was the young king of Judah who was taken captive to Babylon by Nebuchadnezzar in 597 BC. (2 Kings 24:15). The date of the capture of Jerusalem (March 16, 597 BC) was learned in 1955 when Donald J. Wiseman, then of the British Museum,  read a cuneiform tablet from Babylon. About 300 cuneiform tablets, dating between 595 and 570 BC, were found near the Ishtar Gate in Babylon. They contain lists of rations such as barley and oil paid to the captives and craftsmen. Persons from various countries are mentioned: Egypt, Philistia, Phoenicia, Asia Minor, Judah, etc. Some Biblical names are included: Gaddiel, Semachiah, and Shelemiah (a name mentioned prominently in Jeremiah 36-37). The most interesting name is Yaukin, king of the land of Yahud (Judah), along with five royal princes. The name, pronounced Yow-keen, is known to be an abbreviation for Jehoiachin. One document in which his name occurs is dated to 592 BC. These tablets show that the Babylonians continued to regard Jehoiachin as the legitimate king of Judah and gave him special treatment while he was in captivity (2 Kings 25:27-30; Jeremiah 52:31-34). The tablets were read by E. F. Weidner in the basement of the Kaiser Friedrich Museum, Berlin, after 1933.