Jesus and the Moneychangers

We noted in a previous post that there are two accounts of Jesus cleansing the temple. By this we mean the temple precinct (the hieron), not the sanctuary where only priests were allowed (the naos). For the first account, early in his ministry, see John 2:13-25. The second account, toward the close of his ministry, is recorded in Matthew 21:12-13; Mark 11:15-18; and Luke 19:45-48.

Artist Balage Balogh illustrates the scene of Jesus and the Money Changers. See more of his work at Archaeology Illustrated here. 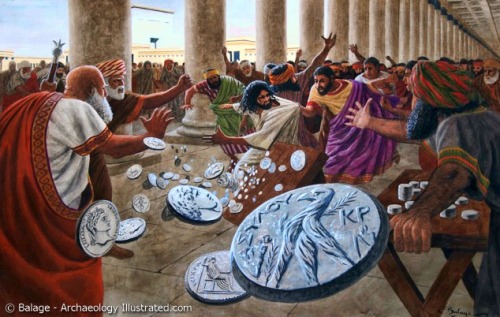 The biblical account also mentions the animals and birds that were for sale to those coming to Jerusalem to worship (John 2:16; Matthew 21:12).

Money changers. (English versions use moneychagers, money-changers, and money changers.) The Jews normally would not bring the foreign money as an offering to the temple. The money had to be changed into the half-shekel of ancient Israel. This would necessitate money changers. Those who have traveled to foreign countries understand that money changers are common and necessary. Alfred Edersheim, who wrote a book on The Temple: Its Ministry and Services, pointed out that the total sum derived annually from the Temple tribute was large. The money changers were simply in the wrong place.

It is generally held that the coin used by the Jews for the temple tax was the Tyre shekel, which after 19 B.C. was most likely minted in Jerusalem (cf. Hendin, Guide to Biblical Coins, 175).

A hoard of coins including Tyrian Shekels, half shekels, and denarii bearing the image of  Roman Emperor Augustus (30 B.C.– A.D. 14) was found a few years ago at Ussifiyeh (Isfiya), a Druze village on Mount Carmel.

The information sign in the Eretz Israel Museum in Tel Aviv says,

The hoard probably represents a delivery of Temple tax intercepted and hidden away due to the events of the Jewish War which broke out in 66 C.E.

Click on the photo for an image large enough to use in classes and sermons.

2 responses to “Jesus and the Moneychangers”