John baptized in the river Jordan

John the Baptist proclaimed the coming Messiah in the Wilderness of Judea. The Gospel accounts point out that many people from Jerusalem and all Judea and the region about the Jordan came to be baptized. These were Jews who were being called to repent and confess their sins.

Then Jerusalem and all Judea and all the region about the Jordan were going out to him,  and they were baptized by him in the river Jordan, confessing their sins. (Matthew 3:5-6 ESV)

The photo shows a view of the River Jordan at the traditional site where John was baptizing. This photo was made in the spring of the year when the river shows the flow of mud as a result of the spring rains. 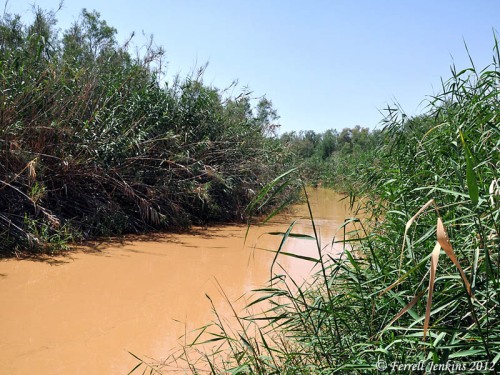 Jesus was baptized by John, not because he was a sinner, but because it was part of God’s plan for him “to fulfill all righteousness.”

Then Jesus came from Galilee to the Jordan to John, to be baptized by him. John would have prevented him, saying, “I need to be baptized by you, and do you come to me?” But Jesus answered him, “Let it be so now, for thus it is fitting for us to fulfill all righteousness.” Then he consented. And when Jesus was baptized, immediately he went up from the water, and behold, the heavens were opened to him, and he saw the Spirit of God descending like a dove and coming to rest on him; and behold, a voice from heaven said, “This is my beloved Son, with whom I am well pleased.” (Matthew 3:13-17 ESV)