Recently we reported the discovery of a rare Second Temple inscription seal here. The original announcement said the inscription was inscribed with an Aramaic inscription which could be translated “Pure for G-d.” 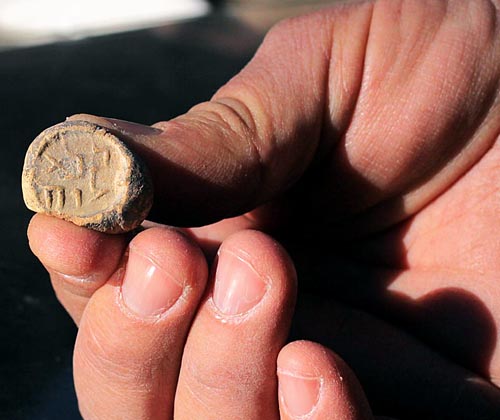 Naeh also believes the object is related to Temple worship and purity, but reads the inscription differently, as “Dakar a Leyehoyariv.” Dakar in Aramaic means ram and a stands for aleph, the first day of the week, when the priestly order of Yehoyariv was on duty in the Temple.

Thus, the object was used in Temple worship, but not how Reich and Shukron believe it was, says Naeh. To ensure the purity of animal sacrifices offered in the Temple — and to maintain an economic monopoly, Naeh believes — pilgrims had to buy their offerings in the Temple courts. They gave money to a treasurer who would exchange it for a token inscribed with the type of sacrifice they had purchased and the date.

Like Reich and Shukron, Naeh supports his theory with a mishnaic verse citing the existence of such tokens. With regard to Reich and Shukron’s interpretation, he said: “Purity was very fluid; the touch of an impure person was enough to make the object impure, so it is unlikely such a seal existed.”

He also said the object could not be a seal because it lacked a hole for a thread or a handle to affix it to another object.

The full article in Ha’aretz may be read here.