The Israel Antiquities Authority announced the opening today of what is being called the First Temple Period Ophel City Walls Site in the Walls Around Jerusalem National Park.

In a festive ceremony that was held Today – Tuesday, June 21, 2011, the Ophel City Wall site, a complex of buildings uncovered along the route of the fortifications from the First Temple period (tenth-sixth centuries BCE), and the display of the earliest written document ever uncovered in Jerusalem was inaugurated. The opening of the site, located in the Walls Around  Jerusalem National Park, and the exhibit in the Davidson Center are made possible through the generous donation by Daniel Mintz and Meredith Berkman.

Upon completion of the excavation and conservation work at the Ophel City Wall site, visitors will now be able to touch the stones and walls whose construction tells the history of Jerusalem throughout the ages.  It is now possible to walk comfortably through the built remains, in places that were previously closed to the public, to sense their splendor and learn about the history of the region by the signage and the different means of presentation and illustration.

This photo shows construction work in the area a few months ago. 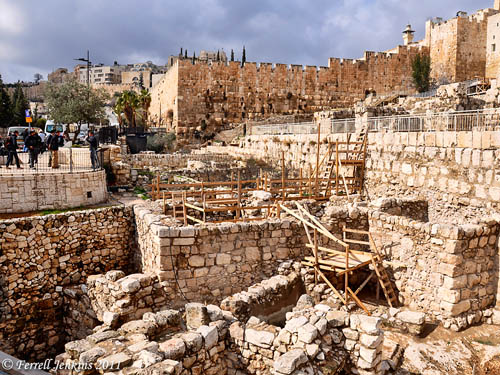 Here is a more recent view showing workmen putting final touches on the nice stairs and overviews for those who enter the site through the Davidson Center.

The architecture at the site that was exposed includes an impressive building thought to be a gate house, a royal edifice, a section of a tower and the city wall itself. Dr. Mazar suggests identifying the buildings as part of the complex of fortifications that King Solomon constructed in Jerusalem: “…until he had made an end of building his own house, and the house of the Lord, and the wall of Jerusalem round about” (1 Kings 3:1). In addition to the fortifications of the First Temple period, sections of the Byzantine city wall and two of its towers were exposed. This wall was built at the initiative of the Byzantine empress Eudocia in the fifth century CE. In addition to the complex of fortifications, the excavation of two rooms from the Second Temple period (first century CE) was completed, which were preserved to a height of two stories.

The highlight of the excavations is the complete exposure of the gate house. The plan of this impressive building includes four rooms of identical size, arranged on both sides of a broad corridor paved with crushed limestone. The plan of the gate house is characteristic of the First Temple period (tenth-sixth centuries BCE) and is similar to contemporaneous gates that were revealed at Megiddo, Be‘er Sheva’ and Ashdod. The excavator, Eilat Mazar, suggests identifying the gate house here with the ‘water gate’ mentioned in the Bible: “…and the temple servants living on Ophel repaired to a point opposite the Water Gate on the east and the projecting tower” (Nehemiah 3:26). The ground floor of a large building that was destroyed in a fierce conflagration can be seen east of the gate. Mazar suggests that this structure was destroyed by the Babylonian conquest of the city in 586 BCE. Twelve very large, clay store jars (pithoi), which probably contained wine or oil, were discovered on the floor of the building. Engraved on the shoulder of one of these pithoi is the Hebrew inscription “לשר האו…”. The inscription indicates that this pithos belonged to one of the kingdom’s ministers, perhaps the overseer of the bakers.

This photo shows (replicas of?) some of the pithoi on display at the site.

A fragment of a clay tablet written in Akkadian cuneiform script was discovered in the recent re-excavation of the area by Dr. Mazar. The tablet is typical of those “used in antiquity throughout Mesopotamia for international correspondence.”

Analyses of the writing and the clay used to produce the tablet show that the document originated in the Jerusalem region. It seems that it is a copy of a letter that the king of Jerusalem at the time, Abdi-Heba, sent to the king of Egypt. It was customary that a copy of this correspondence would be kept in the archives of the city Salem, which was Jerusalem in that period. The fragment of the tablet constitutes credible evidence of the status of Jerusalem as an important royal city in Canaan, which was administered as a city-state under the auspices of the pharaonic Egypt kingdom.

We have posted info about the first temple period (suggested) gate and wall here, and about the clay tablet earlier here and here.

The site also may be viewed from Ma’aleh Ha-Shalom Street a short distance east of Dung Gate.