Today we traveled north from Tiberias on the Sea of Galilee to Hazor. About the time our bus stopped the rain began. We waited a while, but left the bus as soon as the rain let up. This gave an opportunity to visit the gate, the Canaanite palace, and a few other areas before the rain started again. Finally we left and went on to Dan. There we were able to visit the site with only sprinkles.

By this time of the year I had come to expect that major rains (the latter rains, Joel 2:23) would be over, but still delighted to see the rains coming to a land that has suffered drought for a few years.

From Dan we continued to Banias, the site of New Testament Caesarea Philippi. This is the area where Peter confessed Jesus to be the Christ, the Son of the Living God, and where Jesus made the promise to build His church.

Now when Jesus came into the district of Caesarea Philippi, He was asking His disciples, “Who do people say that the Son of Man is?” And they said, “Some say John the Baptist; and others, Elijah; but still others, Jeremiah, or one of the prophets.”  He said to them, “But who do you say that I am?”  Simon Peter answered, “You are the Christ, the Son of the living God.” And Jesus said to him, “Blessed are you, Simon Barjona, because flesh and blood did not reveal this to you, but My Father who is in heaven.  “I also say to you that you are Peter, and upon this rock I will build My church; and the gates of Hades will not overpower it.  “I will give you the keys of the kingdom of heaven; and whatever you bind on earth shall have been bound in heaven, and whatever you loose on earth shall have been loosed in heaven.”  Then He warned the disciples that they should tell no one that He was the Christ. (Matthew 16:13-20 NAU)

It was still raining some, but I was much impressed with the force of the water today. I have been here on probably every tour since the site has been under Israeli control. I don’t recall ever seeing so much water surging from the earth. This is a good sign, I think. 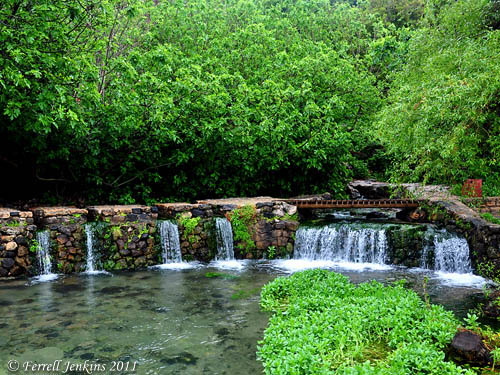 Looking to the source of the Banias River. Photo by Ferrell Jenkins.

The photo below shows the same area from the north. Here we are immediately above the outlet of the powerful springs. 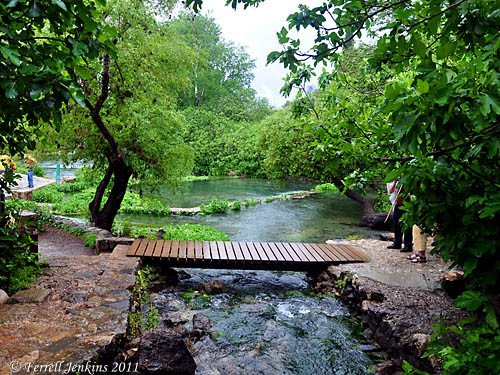 River Banias, a source of the Jordan, from the North. Photo by Ferrell Jenkins.

We got only an occasional glimpse of Mount Hermon to see the patches of snow on it.

2 responses to “Living springs of water”