The mosaics of the Antakya Museum

Yesterday’s post about Antakya, Turkey (biblical Antioch of Syria, Acts 11), was highly popular. We had more than 1400 hits. Thanks for your interest. We hope you will find other entries of interest as well.

Take a look at the two good comments on the previous post. One from Balagebalogh calls attention to the mosaics from Antakya that are in the Baltimore Museum of Art and to his illustration of Antioch, and another from TBrinley calling attention to the mosaics in the Antakya Museum. I haven’t had the opportunity to visit the Baltimore museum, but I have been to the Antakya Museum a few times.

I thought I would share just one of the many mosaics displayed in the Antakya Museum. These mosaics typically date to the fourth or fifth century as I recall. (I am away from home and do not have access to my usual sources.)

Our photo shows a beautifully preserved mosaic displayed on a large wall. I am taking the liberty of copying info about it from Sacred Destinations, a site we have recommended before. Regarding this mosaic the site says,

Detail of mosaic from the floor of the 5th-century Bath of Apolausis, a small suburban bath uncovered in the Antioch excavations on the slopes of Mount Silpios, east of the city. The woman depicted in the middle is Soteria (Salvation) who formed a pair with Apolausis (Enjoyment). Soteria and Apolausis were minor deities who had the power to deliver people from danger and were popularly associated in late antiquity with baths, whose warm waters could give pleasure and soothe pain. Antakya Museum. 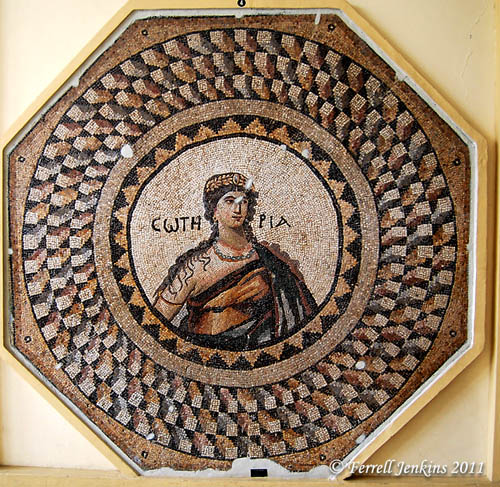 Beautiful, isn’t it? Turkey is filled with similar mosaics. I recall especially those from Zeugma displayed in the Gaziantep Museum.