Our group arrived in Israel today except for two persons who were delayed due to a bad weather connection in Detroit. Just learned a few minutes ago that they are on their way via Paris.

We had time to visit Joppa (Yafo) before proceeding to Netanya, along the Mediterranean coast, for overnight.

Joppa is located in the Plain of Sharon and served as the seaport for Jerusalem which is about 35 miles away. The city is now called Jaffa, or Yafo. Joppa was a walled town as early as the reign of Pharaoh Thutmose III (1490-1435 B.C.) who mentions Joppa in his town lists.

Here are a few of the biblical highlights for Joppa.

The photo below shows the view of modern Tel Aviv from Joppa. The minaret in the foreground dates to the Turkish period. 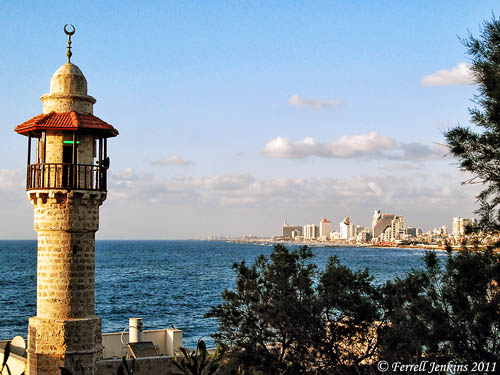 3 responses to “Jonah sailed from Joppa”