During the past few weeks there has been controversy over a site immediately on the outskirts of Bethlehem called Rachel’s Tomb. My thought through the years has been that it is at best one of the “traditional” sites that may or may not be the tomb of Rachel.

Some bloggers have presented varying views on the association of the site with Rachel, the mother of Joseph and Benjamin (Genesis 35:24). I am going to direct you to places where you can read to your satisfaction.

This old photo, which is dated sometime between 1898 and 1946,  is from The American Colony and Eric Matson Collection. Information on ordering is available at Life in the Holy Land. 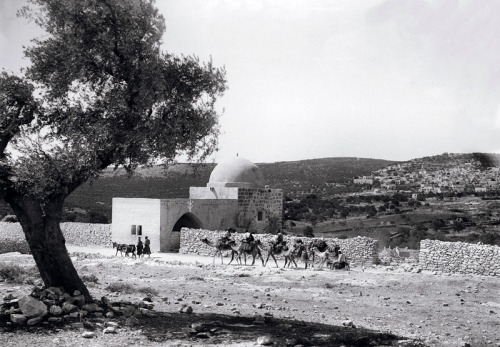 Along with the set of historic views of the Holy Land, Todd Bolen has included quotations about the site from scholarly books that discuss the site. The following comment is from Edward Robinson and Eli Smith, Biblical Researches in Palestine, Mount Sinai and Petraea, 1841. The entire book is available at Google Books.

“Someways up the gently acclivity, which here rises towards the N.E. from Wady Ahmed, stands the Kubbet Rahil, or Rachel’s Tomb . . . This is merely an ordinary Muslim Wely, or tomb of a holy person; a small square building of stone with a dome, and within it a tomb in the ordinary Muhammedan form; the whole plastered over with mortar. Of course the building is not ancient; in the seventh century there was here only a pyramid of stones. It is now neglected, and falling to decay; through pilgrimages are sill made to it by the Jews” (Robinson and Smith, Biblical Researches in Palestine, Mount Sinai and Petraea, 1841: 1: 322).