The Roman emperor Hadrian (A.D. 117-138) left arches in many cities he visited. The arch in Athens marks the entry to the Temple of Zeus. Rant and Reddish describe the arch:

The imposing Arch of Hadrian was constructed in honor of the emperor following the completion of the temple [to Zeus], and Hadrian himself walked through it to attend the dedication of the temple in 131 C.E. The western side of the arch (toward the old city) carries the inscription “This is Athens, the city of Theseus.” The inscription on the eastern side of the arch facing the temple (and toward a section of Athens that had been newly renovated by Hadrian) states, “This is the city of Harrian and not of Theseus. (A Guide to Biblical Sites in Greece and Turkey, 33)

To get a photo like this one requires some good footwork. The arch faces one of the busiest streets in Athens, but one must move out into the street between cars to get an unobstructed view. 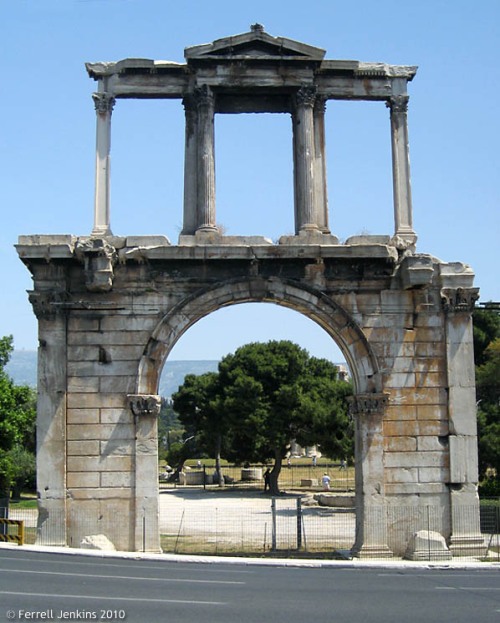 Arch of Hadrian in Athens. Photo by Ferrell Jenkins.

Photoshop, and some other photo editing programs, provide the opportunity to manipulate photos in unusual ways. Here is the same photo textured as if it were painted on canvas. 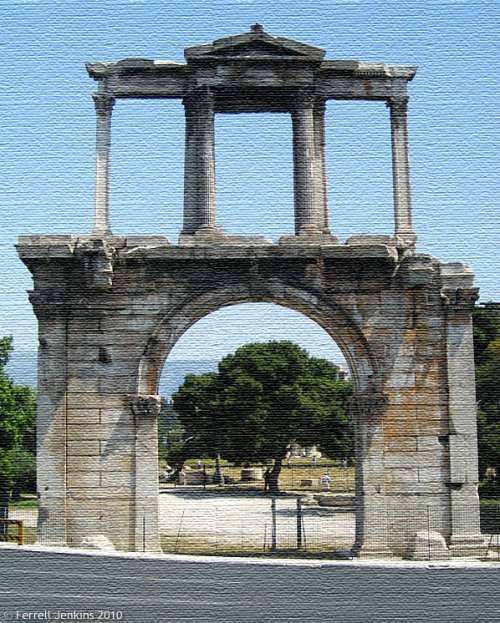 Arch of Hadrian on canvas. Photo by Ferrell Jenkins.

The fourth major persecution of the church by the Roman Empire came in the days of Hadrian.