The remains of a synagogue and farmstead that operated in the Late Byzantine period, which were unknown until now, were exposed in an archaeological excavation conducted on behalf of the Israel Antiquities Authority and underwritten by the Ministry of Construction and Housing, prior to enlarging a residential quarter south of Bet Sheʽan, c. one half kilometer west of the Jordan Valley highway (Route 90).

According to Dr. Walid Atrash and Mr. Ya’aqov Harel, directors of the excavation for the Israel Antiquities Authority, “The discovery of another Samaritan synagogue in the agricultural hinterland south of Bet She’an supplements our existing knowledge about the Samaritan population in this period. It seems that the structures uncovered there were built at the end of the fifth century CE and they continued to exist until the eve of the Muslim conquest in 634 CE, when the Samaritans abandoned the complex. The synagogue that is currently being revealed played an important part in the lives of the farmers who inhabited the surrounding region, and it served as a center of the spiritual, religious and social life there. In the Byzantine period (fourth century CE) Bet She’an became an important Samaritan center under the leadership of Baba Rabbah, at which time the Samaritans were granted national sovereignty and were free to decide their own destiny. This was the case until the end of the reign of Emperor Justinian, when the Samaritans revolted against the government. The rebellion was put down and the Samaritans ceased to exist as a nation.”

The building, facing Mount Gerizim, had a mosaic floor. The last line of a Greek inscription was revealed. According to the report, the inscription reads,

There will likely be other suggestions on the reading of the inscription. 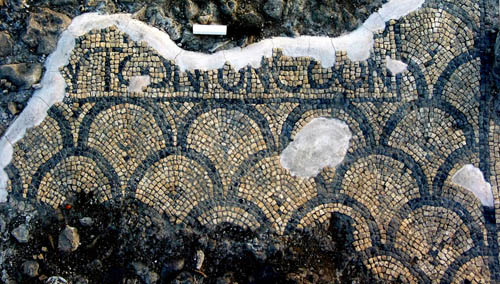 This is the third Samaritan synagogue to be found in the vicinity of Beth-shean.

The full report may be read here.

Bible students know that the Samaritans play an important role in both the Old Testament and the New Testament. Follow these references for some information: 2 Kings 17:29; Luke 9:52; John 4; Acts 8;25.