More and more discoveries from Israel are revealing the influence of Hellenistic and Roman culture in the area. The most recent announcement comes from the University of Haifa excavation at Tel Dor. 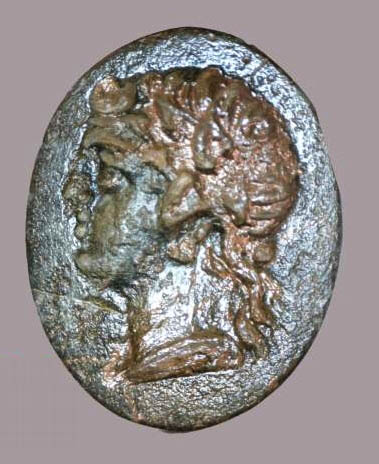 A rare bronze signet ring with the impression of the face of the Greek sun god, Apollo, has been discovered at Tel Dor, in northern Israel, by University of Haifa diggers. “A piece of high-quality art such as this, doubtlessly created by a top-of-the-line artist, indicates that local elites developing a taste for fine art and the ability to afford it were also living in provincial towns, and not only in the capital cities of the Hellenistic kingdoms,” explains Dr. Ayelet Gilboa, Head of the Department of Archaeology at the University of Haifa, who headed the excavations at Dor along with Dr. Ilan Sharon of the Hebrew University of Jerusalem.

When the ring was recovered from a waste pit near Hellenistic structures, it was covered with layers of earth and corrosion, and the archaeologists had no indication whatsoever that it would reveal the shape of a legendary figure. Only after the ring was cleaned up at the Restoration and Conservation laboratory at the Hebrew University’s Institute of Archaeology, was the profile of a beardless young male with long hair, clean shaven and adorned with a laurel wreath, revealed. The ring was examined by Dr. Jessica Nitschke, professor of classical archaeology at Georgetown University in Washington DC, and by Dr. Rebecca Martin, assistant professor of art at Southeast Missouri State University, both of whom are partners in the Tel Dor excavations. Both confirmed that the image is that of Apollo – one of the most important of the Olympian gods in Greek mythology, god of the sun, of light, music and song.

The archaeological context and style of the signet ring date it back to the 4th or 3rd century B.C.E. This type of ring was used as a seal or was dedicated to the temple of the god imprinted on the ring. Since it was found in an urban context and at an orderly archaeological dig, the discovery is of great significance: Most of the small pieces of art originating in the Near East until now are of unknown origin, having been displaced through illegal antique trade, or purchased by museums and collectors before scientific archaeological research began.

The ring also testifies to the cosmopolitan character of this region as far back as 2,300 years ago. Despite the damage caused over the centuries, its high quality is easily recognizable. The precious object was found in the same area as a small gemstone with an engraved image of Alexander the Great and a rare, exquisite Hellenistic mosaic floor that were unearthed during earlier excavation seasons. All these discoveries are very likely to be linked to a nearby structure which is currently being excavated, the architectural features of which indicate that it is a grand elite structure.

These finds indicate that the circulation of fine art objects was not limited to the capital cities of the Hellenistic kingdoms in the east, such as Alexandria in Egypt or Antioch and Seleucia in Syria, where the main populations were Greek, but also spread to smaller centers, such as Dor, which was primarily populated by local Phoenician inhabitants.

The town of Dor was an important port on the Mediterranean shore from 2000 B.C.E. until 250 C.E. Pieces of Greek-style art, such as signet rings and miniature gems, began to appear in the east at the time of the Persian Empire (6th-4th centuries B.C.E.) and became more common after Alexander the Great conquered the region, passing through Dor on his journey from Tyre to Egypt in 332 B.C.E. Subsequently, the town of Dor became one of the centers of Greek culture in the land of Israel, and that culture left its mark even after Dor was conquered by Alexander Jannaeus, King of Judea, around 100 B.C.E. and its impact is evident well into the Roman era.

The full report which provides some information about the dig may be read here. 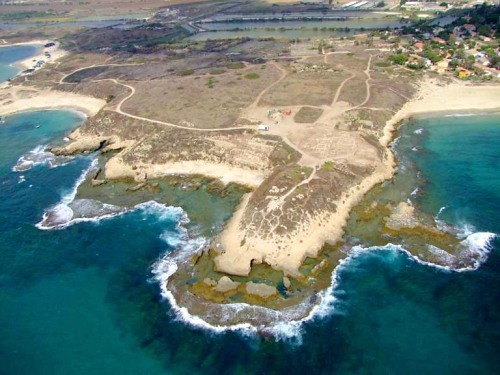 Dor is mentioned only a few times in the Old Testament Scriptures.