The first cataract of the Nile

Aswan is the location of the first cataract of the Nile River. This made it an ideal location for the Aswan Dam which was built between 1898 and 1902. This created a small lake south of the dam, but it was nothing to compare with Lake Nasser which has been formed as a result of the building of the new high dam at Aswan between 1960 and 1971.

The new high dam was constructed at a time when the Soviet Union was providing technical, economic and military support to Egypt. I remember staying in a hotel in Egypt in 1973 filled with Soviet tourists. In the years following we saw none of them. Lake Nasser stretches south for more than 300 miles. Many of the Nubians who lived in this area were resettled by the Egyptian government.

Our photo was made below the new high dam from a Nubian settlement. Click on the photo for a larger image. 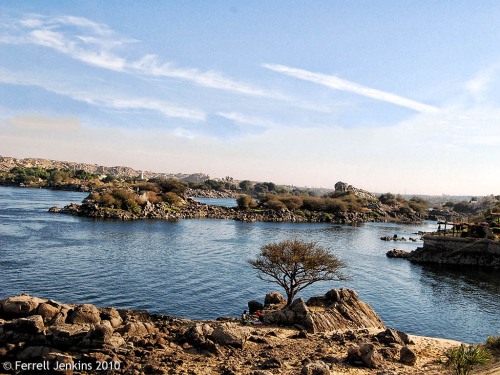 The first cataract of the Nile at Aswan. Photo by Ferrell Jenkins.

Some scholars identify the Arabic name Aswan with the Syene of Ezekiel 29:10 and 30:6. It may be identified with the Sinim of Isaiah 49:12.

I am against you and your waterways. I will turn the land of Egypt into an utter desolate ruin from Migdol to Syene, as far as the border with Ethiopia. (Ezekiel 29:10 NET)

The Hebrew word translated Ethiopia (or Cush) in some English versions is Kush (Cush).

Look, they come from far away! Look, some come from the north and west, and others from the land of Sinim! (Isaiah 49:12 NET)

The Text Critical note in the NET Bible explains,

3 responses to “The first cataract of the Nile”