The Via Egnatia in Thessalonica

The Egnatian Way was one of the famous Roman roads used by the Apostle Paul in his travels to preach the gospel of Christ (Acts 16-17). F. F. Bruce gives a little history about the ancient road.

When Macedonia became a Roman province in 148 b.c., the Via Egnatia was constructed, running east from Dyrrhachium (modern Durres) and Apollonia (modern Poyani) on the Adriatic to Thessalonica, from which existing roads ran to the main Greek cities. The Via Egnatia was later extended farther to Neapolis (modern Kavalla), the port of Philippi, and later still to Byzantium on the Bosporus. When the Roman province of Asia was formed in 133 b.c., the Via Egnatia (with a short sea-crossing at either end) provided easy communication between Rome and the new province. (The Anchor Bible Dictionary, 6:649).

Very few remains from the first century have been exposed in Thessaloniki. Remember that the second largest city of Greece is built over the ancient city. One of the important streets running through the city is named Odos Egnatia (the Egnatian Way). The small street signs in Thessaloniki are located on building rather than on the corner of the street. This makes it difficult for a stranger to drive and read the street signs.

The Via Egnatia runs beside the monumental Arch of Galerius. This arch was built in A.D. 304 to commemorate the emperor’s victory over the Persians in A.D. 297 (Reddish & Fant 136). 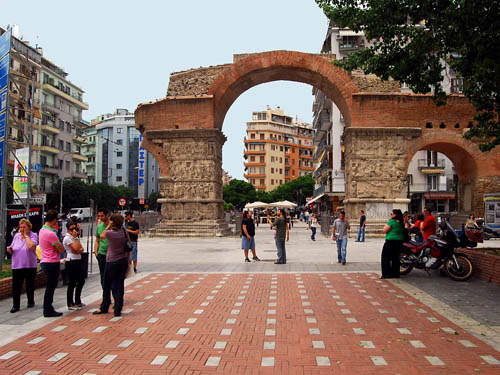 2 responses to “The Via Egnatia in Thessalonica”