This morning we visited the Muze in Gaziantep. This museum contains many of the mosaics and some statues from the Roman city of Zeugma. Zeugma has been covered by the waters of the Euphrates River due to one of the dams built by the Turkish government to provide hydro-electric power and water for irrigation for southeastern Turkey. Archaeologists worked diligently over a period of years to preserve as much of the material as possible. The small mosaic below had been called Gypsy Girl. I think it would rival the Mona Lisa. 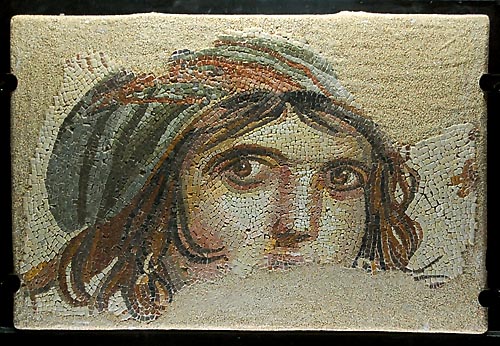 By 11 a.m. we headed for Mount Nemrut. We stopped at a gas station in Bezni for a comfort break. The locals who were sitting around talking did their best to communicate with us. Everyone we meet is friendly. I call this photo “Mayberry, Turkey.”

After checking in at the Zeus Hotel in Kahta, we arranged for transportation to Mount Nemrut. In 1995 I drove to the parking lot in a rental car, but decided that it would be best to leave the driving to someone else. It took about 1 1/2 hours to get to Nemrut Dagi. This mountain is part of the Anti Taurus range and is more than 7000 feet above sea level. This area was known as the Kingdom of Commangene in the three centuries preceding the Christian ear. It served as a buffer between the Seleucids and the Parthians in the third century B.C. In the first century B.C. it served as a buffer between the Romans and the Parthians. The most famous ruler was Antiochos I Epiphanes (ruled 64-38 B.C.). In 72 A.D. Vespasian made the Commangene part of Roman Asia. Being away from home I have relied on LonleyPlanet Turkey (April, 2007) for some of the facts. The sunset was not very brilliant this evening. In fact we left a little early because of an approaching shower. The tumulos was made of loose stones in the form of a pyramid. Antiochus ordered this built as a burial site for himself and some relatives. The remaining tumbled statues of rulers and gods are impressive. Some of the heads are between 6 and 7 feet tall. Take a look at the people beside one of them. The site overlooks the Euphrates River to the East. 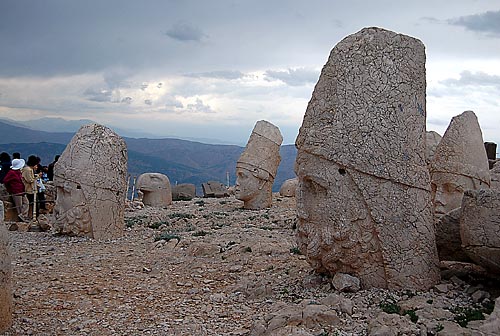 By 8:30 our driver had us back to the hotel and we enjoyed the evening meal. We thought Leon would have arrived in the USA, so we called him to tell him that this was the best day of the tour!