Lake Van is a large inland body of water of about 1400 square miles at an elevation of 5737 feet. The lake is fed by a number of rivers and is highly alkaline. It is said that folks sometimes wash their clothes in the lake. Our hotel is located on the lake side and the view is beautiful.

In Assyrian records this area was called Urartu. In the Bible it is called Ararat. The English term Ararat is a transliteration of the Hebrew term. The four references where the term appears are Gen. 8:4, 2 Kings 19:37 = Isa. 37:38, and Jer. 51:27. The King James version uses the term Armenia in 2 Kings 19:37 and Isaiah 37:38 because that is what the territory was later called. The Septuagint uses Armenia only in Isaiah 37:38.

The photo below shows the castle or rock of Van.

Tushpa, the ancient city of the Urartians, was built on this rock, which provides a commanding view over the lake, and at the base of the rock. At the beginning of the 20th century the city of Van was built over the ancient ruins, but was destroyed by the Russians in 1916. The area now is nothing more than a grassy knoll. On the side of the rock and at the top there are inscriptions, the tombs of eighth and ninth century B.C. Urartian kings, and ruins of a temple. A short distance from Van is another site called Toprakkale which marks the Urartian fortress of Rusahinili.

Here is a photo of some Urartuan pottery from the Museum at Ankara. 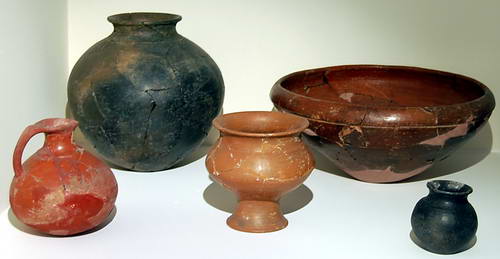 Tomorrow night we will be staying at Batman. Really!

I saw our group off at the Istanbul airport early yesterday morning. Elizabeth informs me that everyone made it to New York safely. A few hours later I left for Van in Eastern Turkey with Leon Mauldin, David Padfield, and Gene Taylor. We will be visiting numerous OT sites in the east. In Van we picked up a rental vehicle and headed for Dogubayazit. This is the small town closest to Mount Ararat. This entire area of Turkey is the ancient Urartu, the land of Ararat. The Bible tells us that the ark landed in the mountains of Ararat (Genesis 8:4). The specific peak is not mentioned and there are several contenders for the mountain of the Bible. Mount Ararat is the one best known.

On the way north from Van we stopped at the Muradiye falls. The terrain you see in the photos if typical of that area of Ararat. Here is a photo of the falls. 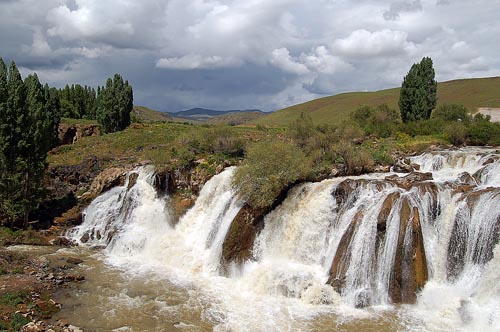 My only other trip to this area was in 1995, so I am excited about the possibility of getting hi-res digital photos of the area.

Between Muradiye and Dogubeyazit we reached an elevation of about 8,000 feet, saw lots of snow still on the mountains, and encountered a little rain. There were shepherds with sheep all through this area. When we arrived our hotel facing Mount Ararat the mountain was totally covered in dark clouds. Within two hours we were able to go out and made wonderful photos of the mountains. We even saw a rainbow. No kidding! The photo below iS of Greater Ararat. We never saw Lesser Ararat completely cloudless. We drove to the check point at the border with Iran. I was surprised to find about 3 tours groups at the hotel. The last time I was there my companions and I were the only ones in the hotel. Here is one of the photos I made yesterday.

This morning we made more photos and visited a few places nearby.  In the afternoon we drove back to Van. We went to the museum but it was closed for restoration. We did make photos of some items in the courtyard. We also visited the Rock in Van. We are now at our hotel on the shore of Lake Van.