We left Van this morning and drove along the lake to the place where we could take a boat to Akdamar Island in Lake Van. This is where we find an early 10th century Armenian church. The church has undergone an expensive restoration and reopened by the Turkish government a little over two months ago as a museum. Too much to explain about the Armenians and this church at this time. There are some marvelous paintings and carvings of Bible stories inside and outside the church. Here is a photo I made this morning as we approached the island.

Later we enjoyed one of those unexpected moments when we saw a group of men adding a room to a typical (of the area southwest of Van) stone house. There are many similarities between this house and those of Bible times in Israel. This photo shows the steps (ladder) going up to the roof that is made of timbers covered with earth. The people here were absolutely thrilled that we stopped to visit a while.

We arrived at Batman by about 4 p.m. and headed south to Hasankeyf. This is the area of Southeast Anatolia. Batman is a center of oil production. It is a thriving Kurdish town. Our hotel is probably 3-star. It is nice and clean and the staff is very helpful. There is a new mall across the street with a large grocery, and Burger King, and several other stores. Hasankeyf has a history associated with the Seljuks and the Ottoman Empire. I still need to spend some time studying about the site. There are old cave dwellings similar to those one sees in Cappadocia.The guard at one of the archaeological sites told me that Hasankeyf is an Arab town. He said that Batman (only about 20 miles away is a Kurdish town. My main interest in the old city is that it is built on the Tigris River (call Dicle in Turkish). The Tigris begins in the mountians of ancient Ararat and flows into the Persian Gulf. The Tigris is mentioned twice in the Bible. It is said to be the third of the rivers flowing out of the garden of Eden. It flows on the east side of Assyria (Genesis 2:14). The river is also mentioned in Daniel 10:4. The prophet stood beside “the great river, the Tigris.” This likely would have been far south of here. Ancient Nineveh was built on the Tigris. 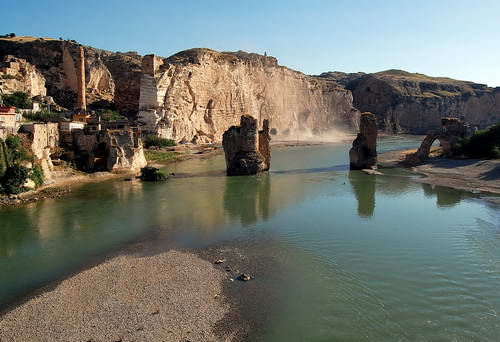 The building of a dam on the Tigris threatens the existence of Hasankeyf. It is difficult to stop “progress,” but it is a shame to see history like this flooded. It has happened to other sites in Turkey such as Zugma on the Euphrates.

Tomorrow we head for Sanliurfa and Harran.