More on Roman Roads and Milestones

We have had a few follow-up questions from our post on Roman Roads and Milestones. One reader asked on Facebook, “Is the milepost inside Jaffa Gate for real??”

If you enter the Old City of Jerusalem at Jaffa Gate you should turn left on the second street (lane would be better). You may not see the name, but it is Demetrius Street. A column, now serving as a lamppost, is actually a portion of an inscribed Roman column. Jerome Murphy-O’Connor (Holy Land, 5th edition) says the Latin inscription reads, 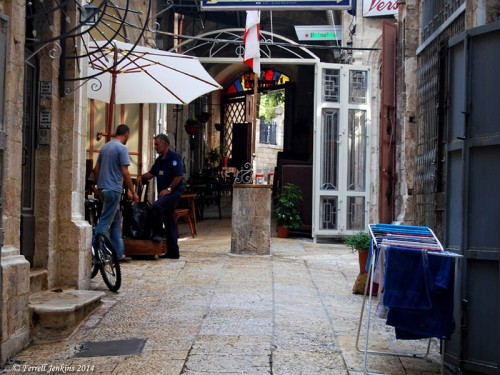 The inscription honours Macus Junius Maximus, Legate of the Augusts (i.e. the emperor Septimius Severus and his eldest son Caracalla), which implies that he was the governor of the province of Judaea, and Legate of the Tenth Legion Fretensis.

The column was erected about A.D. 200. Hoade (Guide to the Holy Land) says the once-taller column “was scalped by a bomb in 1948.” [See comment below by Tom Powers, with link to a photo of the column made in the 1930s.] This column is comparable to a milestone but apparently never served that purpose. The camp of the Tenth Roman Legion was immediately south of this place in the area now occupied by the Armenian Quarter. After the destruction of Jerusalem by the Romans, Titus allowed the Tenth Legion to remain in Jerusalem.

[Titus] … permitted the tenth legion to stay, as a guard at Jerusalem, and did not send them away beyond the Euphrates, where they had been before; (Josephus, Wars of the Jews 7:17)

What is a mile? Another reader asked, “How does the mile mentioned in the NT (I would assume the Roman mile) compare in length to our mile?”

But the term used in Luke 24:13 and John 6:19 is stadion. This term is defined as “a measure of distance of about 192 meters, stade, one-eighth mile” (BDAG). This word also came to mean “an area for public spectacles, arena, stadium.” This is the term translated race in 1 Corinthians 9:24.