The Ossuaries at Dominus Flevit

Jewish graves visible on the western slope of the Mount of Olives. Photo by Ferrell Jenkins.

But there are older graves in the area. If you have walked down from the observation plaza on the Mount of Olives, where the peddlers and camel jockeys abound, to the Garden of Gethsemane, you have likely passed the entrance to the Franciscan chapel of Dominus Flevit. Tradition has it that this is where Jesus stopped to weep over Jerusalem.

Ossuaries in one of the tombs at Dominus Flevit on the western slope of the Mount of Olives. Photo by Ferrell Jenkins.

The first two on the right (counting from the entrance gate) are typical kokhim graves of the period 100 BC–AD 135, the dead were buried in narrow horizontal shafts and later their bones were collected in beautifully made stone boxes (ossuaries) in order to make room for others. (The Holy Land, 5th ed. p. 145)

Beside seven sarcophagi, many ossuary (bone) boxes were excavated at the Dominus Flevit cemetery. The ossuary boxes, made of stone or wood and averaging 25 inches long, 15 inches wide, and 13 inches high, were decorated with inscribed designs on the sides and tops and often had names inscribed on them as well. Examples of these boxes can be seen in site in the excavation area at the Dominus Flevit and at the Israel Museum, Jerusalem. These boxes were used to contain the bones of the dead in secondary burials after the disintegration of the flesh. They were evidently used in Jerusalem until A.D. 70 or possibly until 135. (Mare, W. Harold. The Archaeology of the Jerusalem Area. Grand Rapids: Baker, 1987. p. 198.)

Mare also points out that several biblical names are found on various ossuaries. This does not mean that the ossuaries belonged to a known biblical character, but that the names were common during the period. John McRay gives a list of names found at this site:

Both of our photos are sized for PowerPoint use in teaching.

Ossuaries in ancient Jerusalem and Judea

From about 30 B.C. to A.D. 70 (some scholars extend these dates to as late as A.D. 135), ossuaries were used by the Jews in secondary burials. Numerous of these stone receptacles have been discovered. Most of the dead were first buried in caves or rock-cut tombs. After the flesh had decayed, the bones were placed in an ossuary or “bone box.” This provided space for more burials.

The Hecht Museum at Haifa University has a nice display of ossuaries. Six of these have lids on them. The lid is missing on five others. 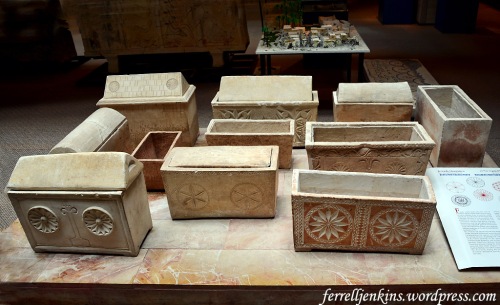 Display of Jewish Ossuaries in the Hecht Museum. Photo by Ferrell Jenkins.

This was a prevalent custom in this period, and one that tied in with the strengthening Jewish belief in the individual, physical resurrection of the deceased from within one’s skeleton (Mishna, Sanhedrin 6:5-6; Babylonian Talmud, Sanhedrin 47b).

This is the description of the ossuaries.

The ossuaries are carved of local soft stone (chalk), and most of them lack ornamentation. Ornamentation, if it appears, was executed by carving, incision, or painting. The variety of decorative patterns on the ossuaries includes floral, geometric and architectural patterns. Some have Hebrew, Aramaic, or Greek inscriptions stating the name of the deceased.

The top of the sign shows some of the decorations found on ossuaries. Note above, the statement that most ossuaries lacked ornamentation.

These ossuaries are small limestone boxes approximately 20 inches long, 10 inches wide and 12 inches high. Usually they have a flat, gabled, or rounded lid. All these ossuaries were used for secondary burials; approximately a year after the original burial, when the body had decomposed, the bones of the deceased were collected and placed in the ossuary. (BAR, July/Aug. 1979).

Stone cutting was one of the main occupations of ancient Israel, and some stone cutters evidently specialized in made-to-order ossuaries.

In a future post I plan to show a cemetery filled with ossuaries.