In the oracle concerning Damascus (Syria), Isaiah uses illustrations of the gleaning of grain and olives –plants common in that time.

Gleanings will be left in it, as when an olive tree is beaten– two or three berries in the top of the highest bough, four or five on the branches of a fruit tree, declares the LORD God of Israel. (Isaiah 17:6 ESV)

We could probably shake off several more of the olives from the limbs below and have a better illustration of what Isaiah says, but hopefully this will serve to illustrate the point.

Olives on a branch at Neot Kedumim. Photo by Ferrell Jenkins.

Another thing Isaiah says is that Damascus would no longer look to the altars they had made with their own hands. These images, and the gods they represented, would fail.

Altars of incense came in all sizes in those days, and many have been uncovered by archaeologists working at various sites. The altar below, now displayed in the Israel Museum, is from Megiddo. 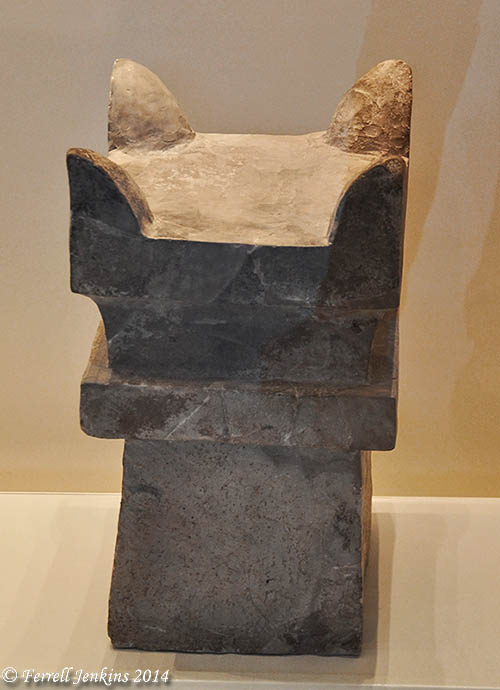 USA sends ambassador back to Syria

For whatever reason(s) the media seems to have overlooked the decision of the Obama administration to send an ambassador back to Syria. Read a little about the decision at CNN.

Syria is an important country historically and politically. The capital city of Damascus is mentioned as early as the time of Abraham (Genesis 14:15), and there is indication that Abraham had considerable contact with the city. He suggests that Eliezer of Damascus might become his heir in the absence of a natural son (Genesis 15:2).

Damascus is situated immediately east of the Anti-Lebanon mountain range on what Rainey calls “the Damascus tableland” (The Sacred Bridge, 32). The River Barada (probably the Abanah of 2 Kings 5:12) runs east from the Anti-Lebanon range through the city of Damascus. The Syrian Desert stretches east of Damascus to the Euphrates River valley. The photo below was made looking west from my hotel balcony to the mountain range. The main part of the city is to the right (north). Go south a few miles and you have a clear view of Mount Hermon. 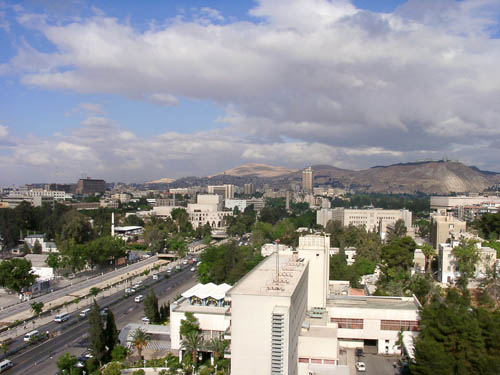 The only references to Damascus in the New Testament are those associated with the conversion of Saul of Tarsus (the Apostle Paul). All but two of these are in Acts 9, 22, and 26. The others are in 2 Corinthians 11:32 and Galatians 1:17.

The Syria of today is not the same political entity we read about in the Bible; only the name is the same.

More on Damascus and Paul

It has been my pleasure to visit Damascus several times since 1967. David McClister, a colleague from the Biblical Studies department at Florida College, and I visited the city in May, 2002. We tried to identify the traditional places associated with Saul’s stay in the vicinity. Southwest of the city, within sight of Mount Hermon, and on the road toward Jerusalem, there is a Greek Orthodox chapel marking the site where Jesus spoke to Saul. We drove as far south toward Quneitra in the Golan Heights as the military would allow. We can not be sure that the chapel marks the exact spot, but we know it was nearby.

Off Straight street one can visit the house of Ananias. All we can say with certainty is that this is another of those uncertain traditional places. Luke tells us that Ananias went to the house of Judas where Paul was staying.

An ancient wall still surrounds much of the old city. A modern chapel is built into the wall to indicate the place where Paul was let down through a window when a plot was made to kill him (Acts 9:25; 2 Cor 11:32-33).

Damascus is first mentioned in the Bible at the time of Abraham (Gen. 14:15; 15:2-3). As the capital of Syria, the city had much contact with the kingdoms of Israel and Judah.

All of the New Testament references to Damascus are related to the conversion of Saul of Tarsus (Acts 9; 22; 26; 2 Cor. 11:32; Gal. 1:17). Saul had participated in the stoning of Stephen and was active in the persecution of the disciples of Christ in Jerusalem. He asked the high priest for authority to go to Damascus and seek out men and women who belonged to the Way and bring them bound to Jerusalem.

The Lord appeared to Saul as he approached Damascus and told him to go into the city where he would be told what he must do (Acts 9:6). Saul stayed at a house on the street called Straight. Ananias came to him and told him to arise and be baptized so that his sins might be washed away (Acts 22:16; 9:18). Saul stayed with the disciples for several days and immediately began to proclaim Jesus in the synagogues as the Son of God (9:20).

The street called Straight (Acts 9:11), the ancient Via Recta of the Roman city, now lies about 20 feet below the present street which runs the length of the old city, east to west. At the east end of the street a Roman gate has been elevated to the present level and partially restored. A small monumental arch can be seen near the middle of the street.

The photo below is one I made on Straight Street in 2002. This is not the main shopping street in the old city, but is historically significant.

The street called straight in Damascus. Photo by Ferrell Jenkins.