The Plain of Bethsaida and the feeding of the five thousand

Once we have an understanding of the region around Bethsaida we will be able to understand more clearly the events surrounding the miracle.

I am not discussing the specific identity of Bethsaida. Is it the site of Et Tell now being excavated under the direction of Prof. Rami Arav? Or is it the site of el-Araj as suggested by the late Mendel Nun? Or could it be, as numerous scholars have suggested through the years, that there is a Bethsaida of Galilee (perhaps associated with el-Araj on the shore of the Sea of Galilee) and another Bethsaida Julias (Et Tell) about 1½ miles north of the sea shore? See the concise comment by Rasmussen in Zondervan Atlas of the Bible (Rev. ed), p. 278).

R. Steven Notley discusses the location question in more detail in The Sacred Bridge (356-359). [Yes, I am aware of the writings of Arav, Freund, and Strickert, as well as the exchanges in Near Eastern Archaeology.]

Our first photo shows the northeast shore of the Sea of Galilee. The flat, green area is the Plain of Bethsaida. 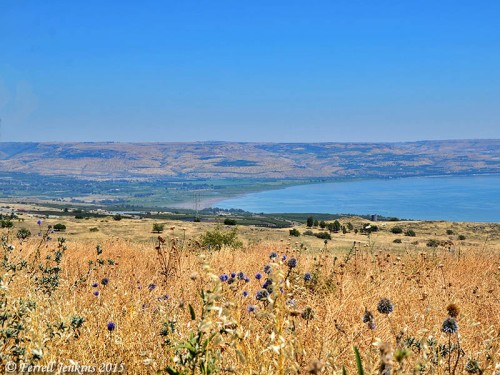 A view of the Plain of Bethsaida taken from the hills above Capernaum and east of Chorazin. Photo by Ferrell Jenkins.

The aerial photo below shows most of the Sea of Galilee. The Jordan River runs from north to south near the center of the photo. The Plain of Bethsaida is seen to the left (east). Capernaum is situated on the shore of Galilee to the right (west). Our view of the Plain of Bethsaida may not be complete but it provides enough of the region to enlighten our understanding of the Biblical text. 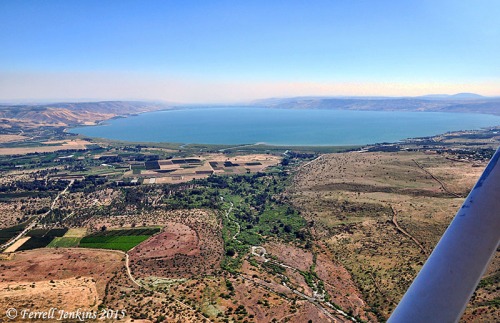 I understand that the Jordan River was the boundary between the rule of Herod Antipas from Tiberias and that of Herod Philip from Bethsaida Julius.

The City Gate − Heart of the Ancient City

The site of et-Tell, thought by some to be the location of New Testament Bethsaida, has provided more evidence of being Old Testament Geshur, or a town of Geshur.

Our photo shows the city gate of this Iron Age city. A sign in the courtyard says,

This is the heart of the ancient town. Here the public activities of the city took place. It was the center of commercial, judicial, and religious life.

And it includes a fitting text that illustrates the importance of the gate in a Biblical city.

Now David was sitting between the two gates, and the watchman went up to the roof of the gate by the wall… (2 Samuel 18:24 ESV) 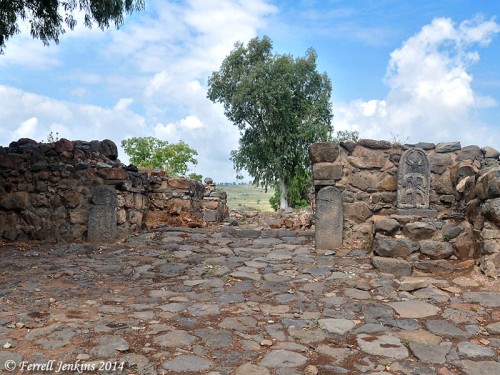 The Iron Age city gate at a town of Geshur. Photo by Ferrell Jenkins.

Notice the plain standing stones on either side of the gate. And notice the stylized figure of a horned bull on the right of the gate. The image is said to represent an Aramean (Syrian) god. There is a Biblical reference to such an image in 2 Kings 23:8.

For more information see these posts:

A day in Galilee

is is the way I began the day by viewing the sunrise over the Sea of Galilee from my hotel window at Tiberias. This is always a beautiful view. It brings to mind many of the teaching of Jesus in the Galilee area. Jesus met his disciples on the shores of Galilee after His resurrection. John 21:12 records that Jesus prepared breakfast for the disciples. 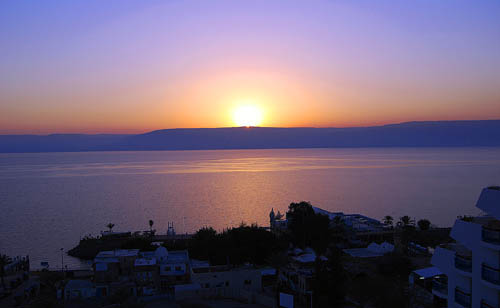 We always include a boat ride on the Sea of Galilee as part of ou tour. One of the men on our boat showed how nets were cast in bible times. This was in the area where Jesus appeared to the disciples. Here is the account in the Gospel of John:

But when the day was now breaking, Jesus stood on the beach; yet the disciples did not know that it was Jesus. 5 So Jesus said to them, “Children, you do not have any fish, do you?” They answered Him, “No.” 6 And He said to them, “Cast the net on the right-hand side of the boat and you will find a catch.” So they cast, and then they were not able to haul it in because of the great number of fish. (John 21:4-6). 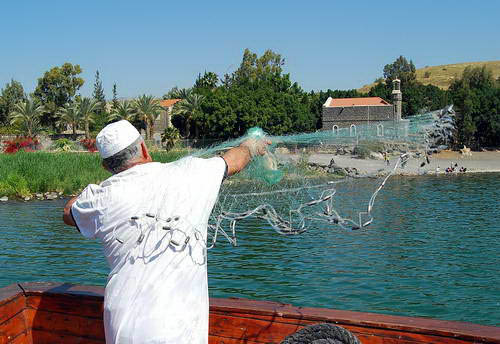 We visited Capernaum, Tabgha, the Mount of Beatitudes, and Bethsaida. We drove along the eastern side of th Sea of Galilee and saw the area where the swine ran down the steep cliff into the sea.(Matthew 8:32). We stopped at En Gev and made a photo of the tell of Hippos. We made a few photos at the new excavations at Tiberias. In December excavations were renewed at Magdala. We stopped at the site, but the entire area is locked and it was practically impossible to make any decent photos of the site due to the fencing around the site. Perhaps in future years the site will be open to the public. Magdala was the home of Mary Magdalene.

Everyone in the group seems to be having a good time learning more about the land of Jesus.

Two of our ladies are publishing blogs that are very informative and are filled with human interest. We learned that the 3rd grade class at Athens Bible School is following our tour as one of their projects. There are four women on our tour who are grandmothers of children in the class. Here are the links to the other blogs.