Isaiah 13: jackals & hyenas in the palaces of Babylon

Babylon would not become the dominant power of the ancient near east until about 626 B.C. (The Assyrian capital of Nineveh fell in 612 B.C., and Assyria was finished at the battle of Carchemish in 605 B.C.). But Isaiah looks ahead to the overthrow of Babylon, an event which would occur in 539 B.C. at the hands of the Medes and Persians.

It will never be inhabited or lived in for all generations; no Arab will pitch his tent there; no shepherds will make their flocks lie down there. But wild animals will lie down there, and their houses will be full of howling creatures; there ostriches will dwell, and there wild goats will dance. Hyenas will cry in its towers, and jackals in the pleasant palaces; its time is close at hand and its days will not be prolonged. (Isaiah 13:20-22 ESV)

Persian interest in Babylon declined by the end of the 5th century B.C. With capitals already at Susa and Persepolis why did they need a third? Alexander the Great first came to Babylon in 331 B.C. intending to make Babylon the capital of a new commercial empire. The great conqueror died in Babylon in June, 323 B.C. His successor in the region, Antiochus I, built a new capital at Seleucia on the Tigris River. This is the region near modern Baghdad.

The palaces where once the leaders of Babylon strolled past the windows were to be occupied by the wild animals of the area.

The second photo is of a hyena, another of the wild animals that would inhabit the empty palaces and towers of Babylon. 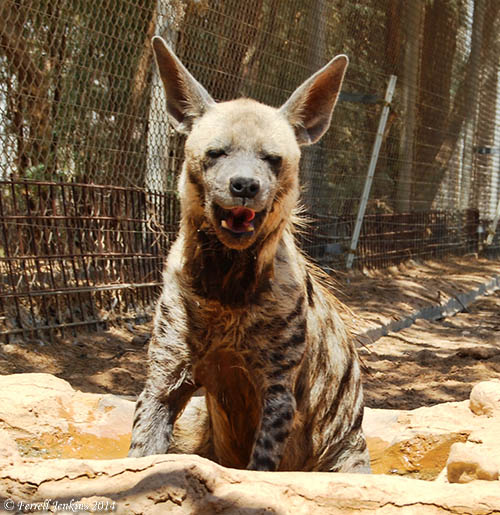 A hyena at Hai-Bar Nature Reserve. Photo by Ferrell Jenkins.

A series of articles on the major kings of Babylon are available at the following links.